The Ballotless Victim of One-Party Governments The American Negro Academy, Occasional Papers No. 16 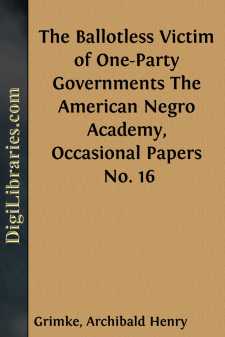 he legal status of the Negro in the United States is difficult to define or describe, because on paper he is an American citizen, entitled to the rights of an American citizen, but in practice he does not get what he is entitled to or anything like it in certain parts of the Republic. His life is safe-guarded by written law, and so is his liberty and his activities in pursuit of happiness and to better his condition. Moreover in order that he may protect himself against the predatory aggression and greed of other citizens he is invested by the supreme law of the land with the right to vote, with a voice in the Government, to enable him to defend himself against the enactment of bad and unequal laws and against their bad and unequal administration. Certainly the Negro seems to be the equal in rights of any other American. That he is on paper there is not a doubt, but that he is not in reality there is not a doubt either. What he is entitled to does not anywhere in the South and in some states of the North square itself with what he actually enjoys. There is an enormous discrepancy in his case between National promise or guarantees and National performance or possessions. He is an American citizen under the National Constitution. To be sure he is, but with a big qualification. He has the right to reach up and out and to grow in every direction like other American citizens whose race and color are different from his own. Not a doubt of it in legal theory but when he puts his theoretical rights to the test of fact he finds that he is different, that he may not do many of the things which white men all about him are doing all the time. He finds that even the Chinese who are denied citizenship in the Republic, receive better treatment, are accorded larger liberties as men than are allowed him in the South.

Why is this? Why does the Negro occupy this very anomalous position in his country? Is it because he is an alien? It cannot really be that, because he is not an alien. But perhaps it is because the whites choose to make believe that he is an alien, which comes nearer the real reason. Nevertheless no alien is he any more than are the whites themselves, if duration of occupancy of the soil has anything to do with making a race native and to the manner born. Is it because the Negro has proved himself an undesirable citizen? Certainly not if past services to the country of the greatest value are any proof to the contrary. In the Revolutionary War he was no insignificant factor in achieving American independence; and in the War of 1812 which defended this independence against British aggression; and in the Civil War which saved the Union and abolished slavery; and in the Spanish-American War which removed a chronic peril to the National peace and added immensely to the National domain. Nor has he failed as a laborer, for he does annually his share of the work of the Nation, and in the production of its wealth. Without Negro labor how much less cotton would the South produce annually, or sugar or rice or tobacco, think you? His labor besides is very much in evidence in southern mines and mills and trades. Then, has he ever plotted against the Government, state or national, was he ever as a class a menace to law and order, or an enemy to property, or a breeder of industrial unrest and violence? On the contrary has he not been patient and peaceful and cheerful under wrongs which would have made any other class of Americans sullen and dangerous and lawless? No, he is not an undesirable citizen for these sufficient reasons, but there is yet another good answer on this head. Negro labor could not in any considerable numbers leave the South voluntarily because Southern capital and landed interests would not let it, would resist by force if found necessary its migration to other parts.

This sounds singular in this land of the free and it is singular, for of no other class of American labor could it be said that its right to migrate from one state to another is actually obstructed by law and would be resisted by force. It is singular but it is nevertheless true. If a thousand, or ten thousand, or a hundred thousand agricultural laborers in the West were to make up their minds to move to the cotton belt of the South, they would be free to do so, regardless of the injury which Western farmers might suffer in consequence of their migration. But if one hundred thousand, or ten thousand, or even one thousand Negro cotton pickers desired to quit picking cotton and to seek their fortune in other states, does anyone imagine that they would be allowed to depart in peace, that they would not find rather by violent experience that they are not at liberty to make the change? The South does not regard the Negro laborer then as undesirable but quite the contrary—only it wants to retain possession of it on its own terms, not on those advantageous to that labor....