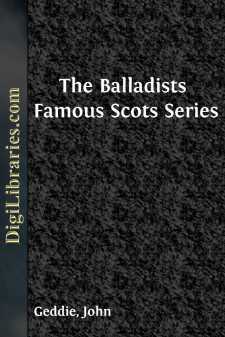 The Lay of the Ash.

Who would set forth to explore the realm of our Ballad Literature needs not to hamper himself with biographical baggage. Whatever misgivings and misadventures may beset him in his wayfaring, there is no risk of breaking neck or limb over dates or names. For of dates and names and other solid landmarks there are none to guide us in this misty morning-land of poetry. The balladist is 'a voice and nothing more'—a voice singing in a chorus of others, in which only faintly and uncertainly we sometimes fancy we can make out the note, but rarely anything of the person or history, of the individual singer. In the hierarchy of song, he is a priest after the order of Melchisedec—without father or mother, beginning of days or end of life.

The Scottish ballads we may thus love and know by heart, and concerning their preservation, collection, collation, we may gather a large store of facts. But the original ballad-writers themselves must remain for us the Great Unknown. Here and there one can lay down vague lines that seem to confine a particular ballad, or group of ballads, within particular bounds of place and of time. Here and there one seems to get a glimpse of the balladist himself, as onlooker or as actor in the scenes of fateful love and deathless grief which he has fixed for ever in the memory of men of his race and blood. There are passages in which, in the light and heat of battle, or in agony of terror or sorrow, we are made to see something of the minstrel as well as his theme. But by no research are we likely at this late date to recover any clew to the birthplace or to the lineaments of the life and face of the grand old poet who wrote the grand old ballad of Sir Patrick Spens; nor do towns contend for the honour of having produced the sweet singer of Kirkconnel Lea, the blithe minstrel of Glenlogie, or the first of all the bards who made the Dowie Dens of Yarrow vocal with the song of unavailing sorrow.

And in truth towns—even such towns as were in those days—could have had but little to do with the birth and shaping of the Scottish Balladists. Chief among the marks by which we may the true ballad-maker know among the verse-makers of his age, is the open-air feeling that pervades his thought and style. Like the Black Douglas, he likes better to hear the laverock sing than the mouse cheep. It is not only that he cares to tread 'the bent sae brown' rather than the paved street; that the tragedies of fiery love and hate quenched by death, in which he delights, are more often enacted under the blue cope of heaven than under vault of stone. What we seem to feel is that these simple old lays, in which lives a passion that still catches the breath and makes the cheek turn pale—whose 'words of might' have yet the power to waft us, mind and sense, into the 'Land of Faëry,' must have been conceived and brought to full strength under the light of the sun and the breath of the wind. 'The Muse,' says Robert Burns, himself of the true kin of the balladists:

'The Muse, nae Poet ever fand her,Till by himsel' he learned to wander,Adown some trottin' burn's meander,An' no think lang.'

Certainly no true ballad was ever hammered out at the desk. It may have been wrought and fashioned for singing in bower or hall; but the fire that shaped it was caught, in gloaming grey or under the 'lee licht o' the mune,' in birken shaw or by wan water.

It is true that one of the earliest of the Scots ballad-makers whose names have been handed down to us—Robert Henryson, who taught the Dunfermline bairns in the hornbook in the fifteenth century—has told us that he sought inspiration at the ingleside over a glass:

'I mend the fyre, and beikit me about,Then tuik ane drink my spreitis to confort,And armit me weill fra the cold thairout;To cut the winter nicht, and mak it schort,I tuik ane quhair, and left all uther sport.'

But this was while conning, in cold weather, the classic tale of Troilus and Cressid....