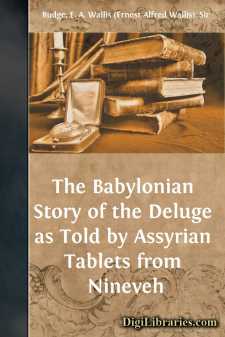 The Discovery of the Tablets at Nineveh by Layard, Rassam and Smith.

In 1845-47 and again in 1849-51 Mr. (later Sir) A. H. Layard carried out a series of excavations among the ruins of the ancient city of Nineveh, "that great city, wherein are more than sixteen thousand persons that cannot discern between their right hand and their left; and also much cattle" (Jonah iv, II). Its ruins lie on the left or east bank of the Tigris, exactly opposite the town of Al-Mawsil, or Môsul, which was founded by the Sassanians and marks the site of Western Nineveh. At first Layard thought that these ruins were not those of Nineveh, which he placed at Nimrûd, about 20 miles downstream, but of one of the other cities that were builded by Asshur (see Gen. x, 11, 12). Thanks, however, to Christian, Roman and Muhammadan tradition, there is no room for doubt about it, and the site of Nineveh has always been known. The fortress which the Arabs built there in the seventh century was known as "Kal'at-Nînawî, i.e., "Nineveh Castle," for many centuries, and all the Arab geographers agree in saying that tile mounds opposite Môsul contain the ruins of the palaces and walls of Nineveh. And few of them fail to mention that close by them is "Tall Nabi Yûnis," i.e., the Hill from which the Prophet Jonah preached repentance to the inhabitants of Nineveh, that "exceeding great city of three days' journey" (Jonah iii, 3). Local tradition also declares that the prophet was buried in the Hill, and his supposed tomb is shown there to this day.

The Walls and Palaces of Nineveh.

The situation of the ruins of the palaces of Nineveh is well shown by the accompanying reproduction of the plan of the city made by Commander Felix Jones, I.N. The remains of the older palaces built by Sargon II (B.C. 721-705), Sennacherib (B.C. 705-681), and Esarhaddon (B.C. 681-668) lie under the hill called Nabi Yûnis, and those of the palaces and other buildings of Ashur-bani-pal (B.C. 681-626) under the mound which is known locally as "Tall al-'Armûshîyah," i.e., "The Hill of 'Armûsh," and "Kuyûnjik." The latter name is said to be derived from two Turkish words meaning "many sheep," in allusion to the large flocks of sheep that find their pasture on and about the mound in the early spring. These two great mounds lie close to the remains of the great west wall of Nineveh, which in the time of the last Assyrian Empire was washed by the waters of the river Tigris. At some unknown period the course of the river changed, and it is now more than a mile distant from the city wall. The river Khausur, or Khoser, divides the area of Nineveh into two parts, and passing close to the southern end of Kuyûnjik empties itself into the Tigris. The ruins of the wails of Nineveh show that the east wall was 16,000 feet long, the north wall 7,000 feet long, the west wall 13,600 feet, and the south wall 3,000 feet; its circuit was about 13,200 yards or 7 1/2 miles.

Discovery of the Library of the Temple of Nebo at Nineveh.

In the spring of 1852 Layard, assisted by H. Rassam, continued the excavation of the "South West Palace" at Kuyûnjik....