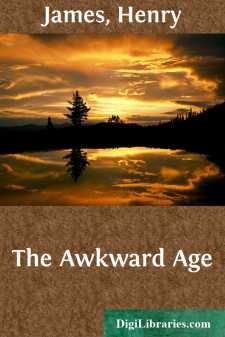 Save when it happened to rain Vanderbank always walked home, but he usually took a hansom when the rain was moderate and adopted the preference of the philosopher when it was heavy. On this occasion he therefore recognised as the servant opened the door a congruity between the weather and the "four-wheeler" that, in the empty street, under the glazed radiance, waited and trickled and blackly glittered. The butler mentioned it as on such a wild night the only thing they could get, and Vanderbank, having replied that it was exactly what would do best, prepared in the doorway to put up his umbrella and dash down to it. At this moment he heard his name pronounced from behind and on turning found himself joined by the elderly fellow guest with whom he had talked after dinner and about whom later on upstairs he had sounded his hostess. It was at present a clear question of how this amiable, this apparently unassertive person should get home—of the possibility of the other cab for which even now one of the footmen, with a whistle to his lips, craned out his head and listened through the storm. Mr. Longdon wondered to Vanderbank if their course might by any chance be the same; which led our young friend immediately to express a readiness to see him safely in any direction that should accommodate him. As the footman's whistle spent itself in vain they got together into the four-wheeler, where at the end of a few moments more Vanderbank became conscious of having proposed his own rooms as a wind-up to their drive. Wouldn't that be a better finish of the evening than just separating in the wet? He liked his new acquaintance, who struck him as in a manner clinging to him, who was staying at an hotel presumably at that hour dismal, and who, confessing with easy humility to a connexion positively timid with a club at which one couldn't have a visitor, accepted his invitation under pressure. Vanderbank, when they arrived, was amused at the air of added extravagance with which he said he would keep the cab: he so clearly enjoyed to that extent the sense of making a night of it. "You young men, I believe, keep them for hours, eh? At least they did in my time," he laughed—"the wild ones! But I think of them as all wild then. I dare say that when one settles in town one learns how to manage; only I'm afraid, you know, that I've got completely out of it. I do feel really quite mouldy. It's a matter of thirty years—!"

"Since you've been in London?"

"For more than a few days at a time, upon my honour. You won't understand that—any more, I dare say, than I myself quite understand how at the end of all I've accepted this queer view of the doom of coming back. But I don't doubt I shall ask you, if you'll be so good as to let me, for the help of a hint or two: as to how to do, don't you know? and not to—what do you fellows call it?—BE done. Now about one of THESE things—!"

One of these things was the lift in which, at no great pace and with much rumbling and creaking, the porter conveyed the two gentlemen to the alarming eminence, as Mr....