The Atlas of Ancient and Classical Geography 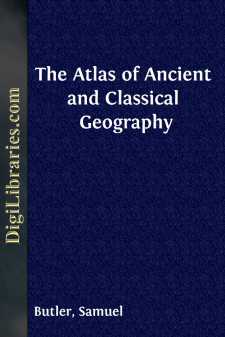 THE accompanying Atlas has been included in this series for the greater convenience of the reader of “Grote's Greece” and other works that ask a continual reference to maps of ancient and classical geography. The disadvantage of having to turn perpetually from the text of a volume to a map at its end, or a few pages away, is often enough to prevent the effective use of the one in elucidating the other. Despite some slight variations of spelling in the classical place-names used by different authors, there need be no difficulty in adapting the same Atlas to various works, whether they are English versions of historians like Herodotus or Livy, or English histories of the ancient world, such as Grote's and Gibbon's. Taking the case of Grote, he preferred, as we know, the use of the “K” in Greek names to the usual equivalent “C,” and he retained other special forms of certain words. A comparative list of a few typical names which appear both in the index to his “History of Greece” in this series, and in the index to the present Atlas, will show that the variation between the two is regular and, fairly uniform and easy to remember:

By comparing in the same way the place-names in Gibbon's and other histories, the reader will need no glossarist in using the Atlas to lighten their geographical allusions. It is not only when he comes to actual wars, campaigns and sieges that he will find a working chart of advantage. When he reads in Grote of the Ionic colonization of Asia Minor, and wishes to relate the later view of its complex process to the much simpler account given by Herodotus, he gains equally by having a map of the region before him.

We realize how Grote himself worked over his topographical notes, eking out his own observations with map, scale and compass, when we read his preliminary survey of Greece, in the second volume of his history. “Greece proper lies between the 36th and 40th parallels of north latitude and between the 21st and 26th degrees of east longitude. Its greatest length, from Mount Olympus to Cape Tænarus, may be stated at 250 English miles; its greatest breadth, from the western coast of Akarnania to Marathon in Attica, at 180 miles; and the distance eastward from Ambrakia across Pindus to the Magnesian mountain Homolê and the mouth of the Peneius is about 120 miles. Altogether its area is somewhat less than that of Portugal.” But as to the exact limits of Greece proper, he points out that these limits seem not to have been very precisely defined even among the Greeks themselves....