The Astral Plane Its Scenery, Inhabitants and Phenomena 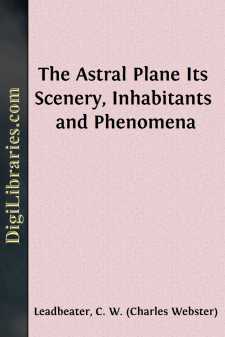 Reference to the astral plane, or Kâmaloka as it is called in Sanskrit, has frequently been made by Theosophical writers, and a good deal of information on the subject of this realm of nature is to be found scattered here and there in our books; but there is not, so far as I am aware, any single volume to which one can turn for a complete summary of the facts at present known to us about this interesting region. The object of this manual is to collect and make some attempt to arrange this scattered information, and also to supplement it slightly in cases where new facts have come to our knowledge. It must be understood that any such additions are only the result of the investigations of a few explorers, and must not, therefore, be taken as in any way authoritative, but are given simply for what they are worth. On the other hand every precaution in our power has been taken to ensure accuracy, no fact, old or new, being admitted to this manual unless it has been confirmed by the testimony of at least two independent trained investigators among ourselves, and has also been passed as correct by older students whose knowledge on these points is necessarily much greater than ours. It is hoped, therefore, that this account of the astral plane, though it cannot be considered as quite complete, may yet be found reliable as far as it goes.

The first point which it is necessary to make clear in describing this astral plane is its absolute reality. Of course in using that word I am not speaking from that metaphysical standpoint from which all but the One Unmanifested is unreal because impermanent; I am using the word in its plain, every-day sense, and I mean by it that the objects and inhabitants of the astral plane are real in exactly the same way as our own bodies, our furniture, our houses or monuments are real—as real as Charing Cross, to quote an expressive remark from one of the earliest Theosophical works. They will no more endure for ever than will objects on the physical plane, but they are nevertheless realities from our point of view while they last—realities which we cannot afford to ignore merely because the majority of mankind is as yet unconscious, or but vaguely conscious, of their existence.

There appears to be considerable misunderstanding even among Theosophical students upon this question of the reality of the various planes of the universe. This may perhaps be partly due to the fact that the word "plane" has occasionally been very loosely used in our literature—writers speaking vaguely of the mental plane, the moral plane, and so on; and this vagueness has led many people to suppose that the information on the subject which is to be found in Theosophical books is inexact and speculative—a mere hypothesis incapable of definite proof. No one can get a clear conception of the teachings of the Wisdom-Religion until he has at any rate an intellectual grasp of the fact that in our solar system there exist perfectly definite planes, each with its own matter of different degrees of density, and that some of these planes can be visited and observed by persons who have qualified themselves for the work, exactly as a foreign country might be visited and observed; and that, by comparison of the observations of those who are constantly working on these planes, evidence can be obtained of their existence and nature at least as satisfactory as that which most of us have for the existence of Greenland or Spitzbergen....