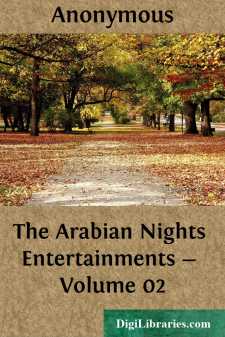 THE STORY OF THE LITTLE HUNCH-BACK.

There was in former times at Casgar, on the extreme boundaries of Tartary, a tailor who had a pretty wife, whom he affectionately loved, and by whom he was beloved with reciprocal tenderness. One day while he was at work, a little hunch-back seated himself at the shop door and began to sing, and play upon a tabor. The tailor was pleased with his performance, and resolved to take him to his house to entertain his wife: "This little fellow," said he, "will divert us both this evening." He accordingly invited him, and the other readily accepted the invitation: so the tailor shut up his shop, and carried him home. Immediately after their arrival the tailor's wife placed before them a good dish of fish; but as the little man was eating, he unluckily swallowed a bone, which, notwithstanding all that the tailor and his wife could do, choked him. This accident greatly alarmed them both, dreading, if the magistrates should hear of it, that they would be punished as murderers. However, the husband devised a scheme to get rid of the corpse. He reflected that a Jewish doctor lived just by, and having formed his plan, his wife and he took the corpse, the one by the feet and the other by the head, and carried it to the physician's house. They knocked at the door, from which a steep flight of stairs led to his chamber. The servant maid came down without any light, and opening the door, asked what they wanted. "Have the goodness," said the tailor, "to go up again, and tell your master we have brought him a man who is very ill, and wants his advice. Here," continued he, putting a piece of money into her hand, "give him that beforehand, to convince him that we do not mean to impose." While the servant was gone up to inform her master, the tailor and his wife hastily conveyed the hunchbacked corpse to the head of the stairs, and leaving it there, hurried away.

In the mean time, the maid told the doctor, that a man and woman waited for him at the door, desiring he would come down and look at a sick man whom they had brought with them, and clapped into his hand the money she had received. The doctor was transported with joy; being paid beforehand, he thought it must needs be a good patient, and should not be neglected. "Light, light," cried he to the maid; "follow me quickly." As he spoke, he hastily ran towards the head of the stairs without waiting for a light, and came against the corpse with so much violence that he precipitated it to the bottom, and had nearly fallen with it. "Bring me a light," cried he to the maid; "quick, quick." At last she brought one, and he went down stairs with her; but when he saw that what he had kicked down was a dead man, he was so frightened, that he invoked Moses, Aaron, Joshua, Esdras, and all the other prophets of his nation. "Unhappy man that I am," said he, "why did I attempt to come without a light! I have killed the poor fellow who was brought to me to be cured: doubtless I am the cause of his death, and unless Esdras's ass come to assist me, I am ruined: Mercy on me, they will be here out of hand, and drag me out of my house for a murderer."

Notwithstanding the perplexity and confusion into which he was thrown, he had the precaution to shut his door, for fear any one passing by should observe the accident of which he reckoned himself to be the author....