The Approach to Philosophy 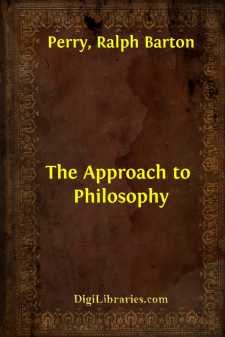 In an essay on "The Problem of Philosophy at the Present Time," Professor Edward Caird says that "philosophy is not a first venture into a new field of thought, but the rethinking of a secular and religious consciousness which has been developed, in the main, independently of philosophy." If there be any inspiration and originality in this book, they are due to my great desire that philosophy should appear in its vital relations to more familiar experiences. If philosophy is, as is commonly assumed, appropriate to a phase in the development of every individual, it should grow out of interests to which he is already alive. And if the great philosophers are indeed never dead, this fact should manifest itself in their classic or historical representation of a perennial outlook upon the world. I am not seeking to attach to philosophy a fictitious liveliness, wherewith to insinuate it into the good graces of the student. I hope rather to be true to the meaning of philosophy. For there is that in its stand-point and its problem which makes it universally significant entirely apart from dialectic and erudition. These are derived interests, indispensable to the scholar, but quite separable from that modicum of philosophy which helps to make the man. The present book is written for the sake of elucidating the inevitable philosophy. It seeks to make the reader more solicitously aware of the philosophy that is in him, or to provoke him to philosophy in his own interests. To this end I have sacrificed all else to the task of mediating between the tradition and technicalities of the academic discipline and the more common terms of life.

The purpose of the book will in part account for those shortcomings that immediately reveal themselves to the eye of the scholar. In Part I various great human interests have been selected as points of departure. I have sought to introduce the general stand-point and problem of philosophy through its implication in practical life, poetry, religion, and science. But in so doing it has been necessary for me to deal shortly with topics of great independent importance, and so risk the disfavor of those better skilled in these several matters. This is evidently true of the chapter which deals with natural science. But the problem which I there faced differed radically from those of the foregoing chapters, and the method of treatment is correspondingly different. In the case of natural science one has to deal with a body of knowledge which is frequently regarded as the only knowledge. To write a chapter about science from a philosophical stand-point is, in the present state of opinion, to undertake a polemic against exclusive naturalism, an attitude which is itself philosophical, and as such is well known in the history of philosophy as positivism or agnosticism. I have avoided the polemical spirit and method so far as possible, but have, nevertheless, here taken sides against a definite philosophical position. This chapter, together with the Conclusion, is therefore an exception to the purely introductory and expository representation which I have, on the whole, sought to give....