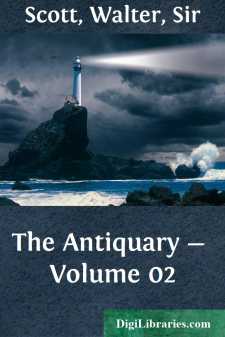 CHAPTER FIRST. Wiser Raymondus, in his closet pent,Laughs at such danger and adventurementWhen half his lands are spent in golden smoke,And now his second hopeful glasse is broke,But yet, if haply his third furnace hold,Devoteth all his pots and pans to gold.*

* The author cannot remember where these lines are to be found: perhaps in Bishop Hall's Satires. [They occur in Book iv. Satire iii.]

About a week after the adventures commemorated in our last CHAPTER, Mr. Oldbuck, descending to his breakfast-parlour, found that his womankind were not upon duty, his toast not made, and the silver jug, which was wont to receive his libations of mum, not duly aired for its reception.

"This confounded hot-brained boy!" he said to himself; "now that he begins to get out of danger, I can tolerate this life no longer. All goes to sixes and sevens—an universal saturnalia seems to be proclaimed in my peaceful and orderly family. I ask for my sister—no answer. I call, I shout—I invoke my inmates by more names than the Romans gave to their deities—at length Jenny, whose shrill voice I have heard this half-hour lilting in the Tartarean regions of the kitchen, condescends to hear me and reply, but without coming up stairs, so the conversation must be continued at the top of my lungs. "—Here he again began to hollow aloud—"Jenny, where's Miss Oldbuck?"

"Miss Grizzy's in the captain's room."

"Umph! I supposed as much again—and where's Caxon?"

"Awa to the town about the captain's fowling-gun, and his setting-dog."

"And who the devil's to dress my periwig, you silly jade?—when you knew that Miss Wardour and Sir Arthur were coming here early after breakfast, how could you let Caxon go on such a Tomfool's errand?"

"Me! what could I hinder him?—your honour wadna hae us contradict the captain e'en now, and him maybe deeing?"

"Dying!" said the alarmed Antiquary,—"eh! what? has he been worse?"

* It is, I believe, a piece of free-masonry, or a point of conscience, among the Scottish lower orders, never to admit that a patient is doing better. The closest approach to recovery which they can be brought to allow, is, that the pairty inquired after is "Nae waur."

"Then he must be better—and what good is a dog and a gun to do here, but the one to destroy all my furniture, steal from my larder, and perhaps worry the cat, and the other to shoot somebody through the head. He has had gunning and pistolling enough to serve him one while, I should think."

Here Miss Oldbuck entered the parlour, at the door of which Oldbuck was carrying on this conversation, he bellowing downward to Jenny, and she again screaming upward in reply.

"Dear brother," said the old lady, "ye'll cry yoursell as hoarse as a corbie—is that the way to skreigh when there's a sick person in the house?"

"Upon my word, the sick person's like to have all the house to himself,— I have gone without my breakfast, and am like to go without my wig; and I must not, I suppose, presume to say I feel either hunger or cold, for fear of disturbing the sick gentleman who lies six rooms off, and who feels himself well enough to send for his dog and gun, though he knows I detest such implements ever since our elder brother, poor Williewald, marched out of the world on a pair of damp feet, caught in the Kittlefitting-moss....