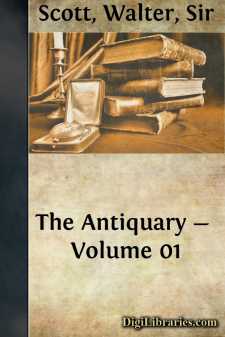 The present work completes a series of fictitious narratives, intended to illustrate the manners of Scotland at three different periods. Waverley embraced the age of our fathers, Guy Mannering that of our own youth, and the Antiquary refers to the last ten years of the eighteenth century. I have, in the two last narratives especially, sought my principal personages in the class of society who are the last to feel the influence of that general polish which assimilates to each other the manners of different nations. Among the same class I have placed some of the scenes in which I have endeavoured to illustrate the operation of the higher and more violent passions; both because the lower orders are less restrained by the habit of suppressing their feelings, and because I agree, with my friend Wordsworth, that they seldom fail to express them in the strongest and most powerful language. This is, I think, peculiarly the case with the peasantry of my own country, a class with whom I have long been familiar. The antique force and simplicity of their language, often tinctured with the Oriental eloquence of Scripture, in the mouths of those of an elevated understanding, give pathos to their grief, and dignity to their resentment.

I have been more solicitous to describe manners minutely than to arrange in any case an artificial and combined narrative, and have but to regret that I felt myself unable to unite these two requisites of a good Novel.

The knavery of the adept in the following sheets may appear forced and improbable; but we have had very late instances of the force of superstitious credulity to a much greater extent, and the reader may be assured, that this part of the narrative is founded on a fact of actual occurrence.

I have now only to express my gratitude to the Public for the distinguished reception which, they have given to works, that have little more than some truth of colouring to recommend them, and to take my respectful leave, as one who is not likely again to solicit their favour.

To the above advertisement, which was prefixed to the first edition of the Antiquary, it is necessary in the present edition to add a few words, transferred from the Introduction to the Chronicles of the Canongate, respecting the character of Jonathan Oldbuck.

"I may here state generally, that although I have deemed historical personages free subjects of delineation, I have never on any occasion violated the respect due to private life. It was indeed impossible that traits proper to persons, both living and dead, with whom I have had intercourse in society, should not have risen to my pen in such works as Waverley, and those which, followed it. But I have always studied to generalise the portraits, so that they should still seem, on the whole, the productions of fancy, though possessing some resemblance to real individuals. Yet I must own my attempts have not in this last particular been uniformly successful. There are men whose characters are so peculiarly marked, that the delineation of some leading and principal feature, inevitably places the whole person before you in his individuality....