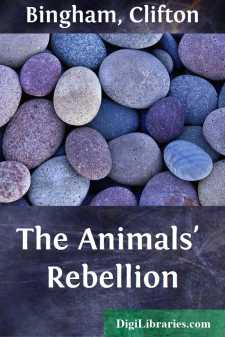 The "Trip to Sea" had long been made,The "Picnic" bills had all been paid;But if you'll listen, I will tellWhat made the animals rebel.

The Tiger was dissatisfied—"Why should the Lion reign?" he cried;"He's no more King of Beasts than I;So let us all his rule defy!"

A secret meeting then he called:And while the others stood appalled,His wants and grievances explained,And quickly some adherents gained.

The Fox his joy could not conceal--"In guns," thought he, "I'll make a deal!"The Owl, who all his speeches heard,Took care to take down every word:

And ere the rising of the sun,The Great Rebellion had begun!

SECRET MEETING OF THE REBELS The Tiger's Petition

The King sat on his Throne one day,  His Crown upon his brow;To him, in most obsequious way,  The Tiger made his bow.

"What have we here?" demanded he,  "And what does he require?"The Elephant said, "Here I see  A traitor, royal sire!"

The Brown Bear murmured, "So do I—  He's right, without a doubt!"The monarch cried, with flashing eye,  "Turn this intruder out!"

PRESENTING A PETITION TO THE KING

At midnight, in an empty hut,  Deep in the forest old,The Rebels met with doors close shut,  Their dark schemes to unfold.

"Friends!" Tiger cried, "no more we'll brook  This despot's cruel reign;Our charter lies before us—look!  The plan of our campaign!"

Directly Brother Fox was told,  He ransacked all his stores,And soon was making bags of gold  And selling guns in scores.

The Brown Bear bought a blunderbuss;  And when they saw the arm,The Bunnies all cried, "Don't shoot us!  We've not done any harm!"

The Tiger thought revolvers best,  So he bought half a score;"No guns I've had," said Fox, with zest,  "Went off so well before!"

"Don't fear, my Bunnies, you'll be shot,  Though each has bought a gun;I'll whisper this," said Fox: "they've got  Blank cartridge ev'ry one!"

THE ARMORY Raising the Standard.

From lair to lair the news soon spread,And one and all leapt out of bed,And sallied forth, with loud hurrays,The Standard of Revolt to raise.

The Bear looked fierce, the CrocodilePut on his most bloodthirsty smile;The Leopard and the Wolf were there,And cheers resounded in the air.

The Tiger roared a lengthy speech,And called, in loudest tones, on eachTo do his best when came the fray,Not be afraid, nor run away.

RAISING THE STANDARD OF REVOLT

Next morn a Scout the Camp alarms,The Lion's soldiers fly to arms."The enemy advance!" he cries,"And means to take you by surprise!"In Leo's Camp, on Zootown plains,The utmost consternation reigns.