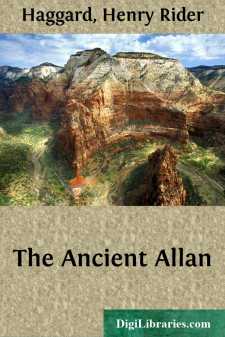 CHAPTER I. AN OLD FRIEND

Now I, Allan Quatermain, come to the weirdest (with one or two exceptions perhaps) of all the experiences which it has amused me to employ my idle hours in recording here in a strange land, for after all England is strange to me. I grow elderly. I have, as I suppose, passed the period of enterprise and adventure and I should be well satisfied with the lot that Fate has given to my unworthy self.

To begin with, I am still alive and in health when by all the rules I should have been dead many times over. I suppose I ought to be thankful for that but, before expressing an opinion on the point, I should have to be quite sure whether it is better to be alive or dead. The religious plump for the latter, though I have never observed that the religious are more eager to die than the rest of us poor mortals.

For instance, if they are told that their holy hearts are wrong, they spend time and much money in rushing to a place called Nauheim in Germany, to put them right by means of water-drinking, thereby shortening their hours of heavenly bliss and depriving their heirs of a certain amount of cash. The same thing applies to Buxton in my own neighbourhood and gout, especially when it threatens the stomach or the throat. Even archbishops will do these things, to say nothing of such small fry as deans, or stout and prominent lay figures of the Church.

From common sinners like myself such conduct might be expected, but in the case of those who are obviously poised on the topmost rungs of the Jacobean—I mean, the heavenly—ladder, it is legitimate to inquire why they show such reluctance in jumping off. As a matter of fact the only persons that, individually, I have seen quite willing to die, except now and again to save somebody else whom they were so foolish as to care for more than they did for themselves, have been not those "upon whom the light has shined" to quote an earnest paper I chanced to read this morning, but, to quote again, "the sinful heathen wandering in their native blackness," by which I understand the writer to refer to their moral state and not to their sable skins wherein for the most part they are also condemned to wander, that is if they happen to have been born south of a certain degree of latitude.

To come to facts, the staff of Faith which each must shape for himself, is often hewn from unsuitable kinds of wood, yes, even by the very best among us. Willow, for instance, is pretty and easy to cut, but try to support yourself with it on the edge of a precipice and see where you are. Then of a truth you will long for ironbark, or even homely oak. I might carry my parable further, some allusions to the proper material of which to fashion the helmet of Salvation suggest themselves to me for example, but I won't.

The truth is that we fear to die because all the religions are full of uncomfortable hints as to what may happen to us afterwards as a reward for our deviations from their laws and we half believe in something, whereas often the savage, not being troubled with religion, fears less, because he half believes in nothing....