The Amphibians and Reptiles of Michoacan, Mexico 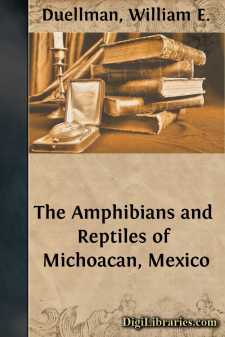 For almost 30 years North American herpetologists have been making extensive collections of reptiles and amphibians in México. Some parts of the country, because of their accessibility, soon became relatively well known; other regions lying off the beaten path were bypassed or inadequately sampled. Principally in the last decade herpetologists have been entering regions from which no collections previously were available in an attempt to fill gaps in known distributions and to discover unknown species of animals. In 1950 Dr. Donald D. Brand led an exploration party from the University of Texas to the poorly explored and faunistically unknown region of southwestern Michoacán. James A. Peters accompanied Brand and collected amphibians and reptiles. In 1951 I welcomed the opportunity to accompany Brand on a second expedition to southwestern Michoacán. Such was the beginning of my interest in the herpetofauna of the region. I have been fortunate to return to Michoacán on four successive trips, all of which had as their purpose the accumulation of data on the herpetofauna that would result in a survey of the component species and an analysis of their distribution.

My original intention was to amplify Peters' (1954) study based on the collections made by him in 1950 and by me in 1951 in the Sierra de Coalcomán. But it soon became evident that in order to understand the relationships of the herpetofauna of the Sierra de Coalcomán, the species inhabiting the Tepalcatepec Valley and adjacent mountain ranges would have to be studied. In the course of making that study I examined all specimens from Michoacán already in museums.

There have been few detailed herpetofaunal studies in México. The first such study of any consequence was that by Bogert and Oliver (1945) on the herpetofauna of Sonora. In that paper the authors analyzed the fauna from a geographic view and showed the transition from tropical species in the southern part of the state to members of the Sonoran Desert assemblage to the north. Martin (1958) made a detailed study of the herpetofauna of the Gómez FarÃ­as region in southern Tamaulipas; he emphasized the ecological distribution of amphibians and reptiles in that region with special reference to cloud forests. Duellman (1958c) presented a preliminary geographic analysis of the herpetofauna of Colima with special reference to the continuity of the species inhabiting the lowlands. Zweifel (1960) discussed in detail the herpetofauna of the Tres MarÃ­as Islands and commented on the derivation of the fauna. Duellman (1960d) provided a detailed account of the geographic distribution of the amphibians known to occur in the lowlands of the Isthmus of Tehuantepec and attempted to account for the present patterns of distribution.

The present report is the first of two parts dealing with the herpetofauna of Michoacán. The purpose of this part is to present a full account of the species of amphibians and reptiles known to inhabit the state of Michoacán; the accounts of the species are accompanied by a brief description of the natural landscape and of the various assemblages of species comprising the major faunistic groups within the region....