The Americans In The South Seas 1901 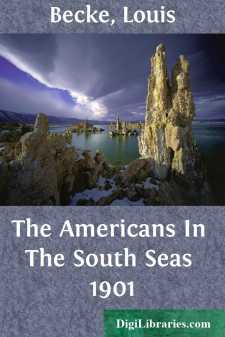 Perhaps the proper title of this article should be "The Influence of American Enterprise upon the Maritime Development of the first Colony in Australia," but as such a long-winded phrase would convey, at the outset, no clearer conception of the subject-matter than that of "The Americans in the South Seas," we trust our readers will be satisfied with the simpler title.

It is curious, when delving into some of the dry-as-dust early Australian and South Sea official records, or reading the more interesting old newspapers and books of "Voyages," to note how soon the Americans "took a hand" in the South Sea trade, and how quickly they practically monopolised the whaling industry in the Pacific, from the Antipodes to Behring Straits.

The English Government which had despatched the famous "First Fleet" of convict transports to the then unknown shores of Botany Bay, had not counted upon an American intrusion into the Australian Seas, and when it came, Cousin Jonathan did not receive a warm welcome from the English officials stationed in the newly founded settlement on the shore of Sydney Cove, as the first settlement in Australia was then called. This was scarcely to be wondered at, for many of those officers who formed part of the "First Fleet" expedition had fought in the war of the rebellion, and most of them knew, what was a fact, that the English Government only a few years earlier had seriously considered proposals for colonising New South Wales with American loyalists, who would have, in their opinion, made better settlers than convicts. And it is probable that if the crowded state of the English gaols and prison hulks had not forced the Government into quickly finding penal settlements for their prisoners, the plan would have been carried out.

When his Majesty's ship Guardian under the command of Nelson's "brave captain, Riou," was wrecked off the Cape of Good Hope, and her cargo of stores, badly needed by the starving colonists of New South Wales, were lying at Cape Town without means of transport, an American merchant skipper saw his chance and offered to convey them to Sydney Cove. But the English officers, although they knew that the colony was starving, were afraid to take the responsibility of chartering a "foreign" ship. Lieutenant King—afterwards to become famous in Australian history—wrote to the almost heartbroken and expectant Governor Phillip from the Cape as follows: "There is here a Whitehaven man who, on his own head, intends going immediately to America and carrying out two vessels, one of 100 or 120 tons—a Marble Head schooner—and the other a brig of 150 tons, both of which he means to load with salt beef and pork which he can afford to sell in the colony at 7d. a pound. He wished encouragement from me, but anything of that kind being out of my power to give him, he has taken a decided part and means to run the risque. I mention this so that you may know what is meant."

This "risque," undertaken by the adventurous "Whitehaven man" was the genesis of the American trading and whaling industry in the Southern Seas, and American enterprise had much to do with the development of the infant colony of New South Wales, inasmuch as American ships not only brought cargoes of food to the starving colonists, but American whalemen showed the unskilled British seamen (in this respect) how to kill the sperm whale and make a profit of the pursuit of the leviathan of the Southern Seas....