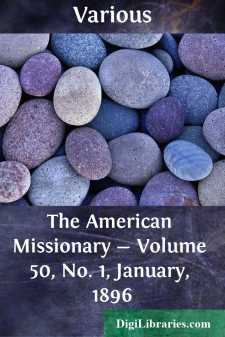 Eighteen Hundred and Ninety-six brings in the Jubilee Year of the American Missionary Association. What marked changes have taken place between 1846 and 1896, even in the range of events with which the Association is connected! Then the great gold discoveries in California had not been made; then little was done by the Church or the Government for the Indian; then the Southern mountaineers were hunting and fishing, innocent of schools and railroads; then slavery dominated the land, oppressing the slave and aiming to crush free thought and speech in the North.

Now how changed! As to slavery, for example. The war and emancipation have written a new page on our national history. But emancipation only battered down the prison doors and sent forth the millions of ignorant, helpless and vicious people—a menace to the Republic and a reproach to the Church, if left in their degraded condition, but presenting a most hopeful field for humane and Christian effort. The facts made an appeal for immediate and effective work and the American Missionary Association sprang into the task. Hundreds of refined and Christian women lent their aid and toiled in the uplifting of the needy, amid the scorn and hatred of the white people, while the churches and benevolent friends responded with the means. The Association has followed up this Christlike beginning by the planting of permanent institutions—schools and churches—and the good effects are becoming apparent in the multitude of industrious, prosperous and educated colored people, the hopeful and helpful leaders of their race. But their advancement only reveals the yet unreached masses behind them as hopeful if promptly met, and as helpless if neglected, as those that preceded them.

This good work is at its crowning point—to push forward is victory, to halt is disaster. But the Association feels the pressure of the hard times. It owes a debt of nearly $100,000, and needs four times as much to sustain the work now in hand. Nevertheless, there is no cause for discouragement in all this. There is vast wealth in the nation, and a large share of it is in the hands of those who are more or less directly connected with the Christian Church, and who are liberal in their gifts when worthy objects are fairly brought to their attention. It is true that there are those whose resources are restricted by the present stagnation in business. This, however, gives the opportunity for Christian self-denial. The relief for imperiled Christian work will come if those who are prospered will give of their abundance, while those less favored will imitate the Macedonians of whom Paul speaks, whose "deep poverty abounded unto the riches of their liberality." Self-denial is not a lost virtue in the Church of Christ.

We make our appeal for relief during this Jubilee year. Already large correspondence has been had with pastors of churches and others, and the responses are very cheering, giving promise of most efficient helpfulness. We hope, therefore, that our next Annual Meeting—our fiftieth anniversary, to be held in Boston—will have the enthusiasm of a Jubilee deliverance from the bondage of hampering limitations, and give a new impulse to our labors for the emancipation of those still in the bondage of ignorance and vice.