The Ambulance Made Two Trips 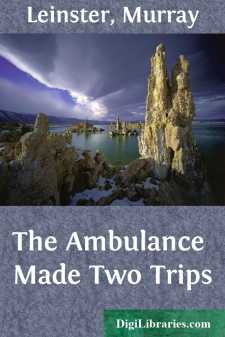 Detective Sergeant Fitzgerald found a package before his door that morning, along with the milk. He took it inside and opened it. It was a remarkably fine meerschaum pipe, such as the sergeant had longed irrationally to own for many years. There was no message with it, nor any card. He swore bitterly.

On his way to Headquarters he stopped in at the orphanage where he usually left such gifts. On other occasions he had left Scotch, a fly-rod, sets of very expensive dry-flies, and dozens of pairs of silk socks. The female head of the orphanage accepted the gift with gratitude.

"I don't suppose," said Fitzgerald morbidly, "that any of your kids will smoke this pipe, but I want to be rid of it and for somebody to know." He paused. "Are you gettin' many other gifts on this order, from other cops? Like you used to?"

The head of the orphanage admitted that the total had dropped off. Fitzgerald went on his way, brooding. He'd been getting anonymous gifts like this ever since Big Jake Connors moved into town with bright ideas. Big Jake denied that he was the generous party. He expressed complete ignorance. But Detective Sergeant Fitzgerald knew better. The gifts were having their effect upon the Force. There was a police lieutenant whose wife had received a mink stole out of thin air and didn't speak to her husband for ten days when he gave it to the Community Drive. He wouldn't do a thing like that again! There was another sergeant—not Fitzgerald—who'd found a set of four new white-walls tires on his doorstep, and was ostracized by his teen-age offspring when he turned them into the police Lost and Found. Fitzgerald gave his gifts to an orphanage, with a fine disregard of their inappropriateness. But he gloomily suspected that a great many of his friends were weakening. The presents weren't bribes. Big Jake not only didn't ask acknowledgments of them, he denied that he was the giver. But inevitably the recipients of bounty with the morning milk felt less indignation about what Big Jake was doing and wasn't getting caught at.

At Headquarters, Detective Sergeant Fitzgerald found a memo. A memo was routine, but the contents of this one were remarkable. He scowled at it. He made phone calls, checking up on the more unlikely parts of it. Then he went to make the regular investigation.

When he reached his destination he found it an unpretentious frame building with a sign outside: "Elite Cleaners and Dyers." There were no plate-glass windows. There was nothing show-off about it. It was just a medium-sized, modestly up-to-date establishment to which lesser tailoring shops would send work for wholesale treatment. From some place in the back, puffs of steam shot out at irregular intervals. Somebody worked a steampresser on garments of one sort or another. There was a rumbling hum, as of an oversized washing-machine in operation. All seemed tranquil.

The detective went in the door. Inside there was that peculiar, professional-cleaning-fluid smell, which is not as alarming as gasoline or carbon tetrachloride, but nevertheless discourages the idea of striking a match. In the outer office a man wrote placidly on one blue-paper strip after another. He had an air of pleasant self-confidence. He glanced up briefly, nodded, wrote on three more blue-paper strips, and then gathered them all up and put them in a particular place....