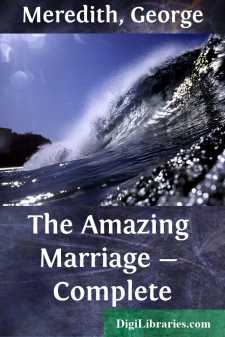 Add to My Favorites
Published: 8 years ago
Downloads: 69
Rating: (0 Votes)

Everybody has heard of the beautiful Countess of Cressett, who was one of the lights of this country at the time when crowned heads were running over Europe, crying out for charity's sake to be amused after their tiresome work of slaughter: and you know what a dread they have of moping. She was famous for her fun and high spirits besides her good looks, which you may judge of for yourself on a walk down most of our great noblemen's collections of pictures in England, where you will behold her as the goddess Diana fitting an arrow to a bow; and elsewhere an Amazon holding a spear; or a lady with dogs, in the costume of the day; and in one place she is a nymph, if not Diana herself, gazing at her naked feet before her attendants loosen her tunic for her to take the bath, and her hounds are pricking their ears, and you see antlers of a stag behind a block of stone. She was a wonderful swimmer, among other things, and one early morning, when she was a girl, she did really swim, they say, across the Shannon and back to win a bet for her brother Lord Levellier, the colonel of cavalry, who left an arm in Egypt, and changed his way of life to become a wizard, as the common people about his neighbourhood supposed, because he foretold the weather and had cures for aches and pains without a doctor's diploma. But we know now that he was only a mathematician and astronomer, all for inventing military engines. The brother and sister were great friends in their youth, when he had his right arm to defend her reputation with; and she would have done anything on earth to please him.

There is a picture of her in an immense flat white silk hat trimmed with pale blue, like a pavilion, the broadest brim ever seen, and she simply sits on a chair; and Venus the Queen of Beauty would have been extinguished under that hat, I am sure; and only to look at Countess Fanny's eye beneath the brim she has tipped ever so slightly in her artfulness makes the absurd thing graceful and suitable. Oh! she was a cunning one. But you must be on your guard against the scandalmongers and collectors of anecdotes, and worst of any, the critic, of our Galleries of Art; for she being in almost all of them (the principal painters of the day were on their knees for the favour of a sitting), they have to speak of her pretty frequently, and they season their dish, the coxcombs do, by hinting a knowledge of her history.

'Here we come to another portrait of the beautiful but, we fear, naughty Countess of Cressett.'

You are to imagine that they know everything, and they are so indulgent when they drop their blot on a lady's character.

They can boast of nothing more than having read Nymriey's Letters and Correspondence, published, fortunately for him, when he was no longer to be called to account below for his malicious insinuations, pretending to decency in initials and dashes: That man was a hater of women and the clergy. He was one of the horrid creatures who write with a wink at you, which sets the wicked part of us on fire: I have known it myself, and I own it to my shame; and if I happened to be ignorant of the history of Countess Fanny, I could not refute his wantonness....