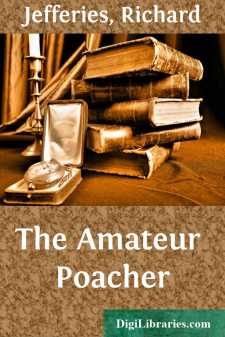 CHAPTER I THE FIRST GUN

They burned the old gun that used to stand in the dark corner up in the garret, close to the stuffed fox that always grinned so fiercely. Perhaps the reason why he seemed in such a ghastly rage was that he did not come by his death fairly. Otherwise his pelt would not have been so perfect. And why else was he put away up there out of sight?—and so magnificent a brush as he had too. But there he stood, and mounted guard over the old flintlock that was so powerful a magnet to us in those days. Though to go up there alone was no slight trial of moral courage after listening to the horrible tales of the carters in the stable, or the old women who used to sit under the hedge in the shade, on an armful of hay, munching their crusts at luncheon time.

The great cavernous place was full of shadows in the brightest summer day; for the light came only through the chinks in the shutters. These were flush with the floor and bolted firmly. The silence was intense, it being so near the roof and so far away from the inhabited parts of the house. Yet there were sometimes strange acoustical effects—as when there came a low tapping at the shutters, enough to make your heart stand still. There was then nothing for it but to dash through the doorway into the empty cheese-room adjoining, which was better lighted. No doubt it was nothing but the labourers knocking the stakes in for the railing round the rickyard, but why did it sound just exactly outside the shutters? When that ceased the staircase creaked, or the pear-tree boughs rustled against the window. The staircase always waited till you had forgotten all about it before the loose worm-eaten planks sprang back to their place.

Had it not been for the merry whistling of the starlings on the thatch above, it would not have been possible to face the gloom and the teeth of Reynard, ever in the act to snap, and the mystic noises, and the sense of guilt—for the gun was forbidden. Besides which there was the black mouth of the open trapdoor overhead yawning fearfully—a standing terror and temptation; for there was a legend of a pair of pistols thrown up there out of the way—a treasure-trove tempting enough to make us face anything. But Orion must have the credit of the courage; I call him Orion because he was a hunter and had a famous dog. The last I heard of him he had just ridden through a prairie fire, and says the people out there think nothing of it.

We dragged an ancient linen-press under the trapdoor, and put some boxes on that, and finally a straight-backed oaken chair. One or two of those chairs were split up and helped to do the roasting on the kitchen hearth. So, climbing the pile, we emerged under the rafters, and could see daylight faintly in several places coming through the starlings' holes. One or two bats fluttered to and fro as we groped among the lumber, but no pistols could be discovered; nothing but a cannon-ball, rusty enough and about as big as an orange, which they say was found in the wood, where there was a brush in Oliver's time....