The Altar of the Dead 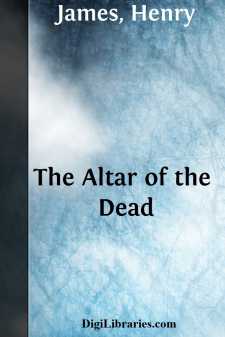 He had a mortal dislike, poor Stransom, to lean anniversaries, and loved them still less when they made a pretence of a figure.  Celebrations and suppressions were equally painful to him, and but one of the former found a place in his life.  He had kept each year in his own fashion the date of Mary Antrim’s death.  It would be more to the point perhaps to say that this occasion kept him: it kept him at least effectually from doing anything else.  It took hold of him again and again with a hand of which time had softened but never loosened the touch.  He waked to his feast of memory as consciously as he would have waked to his marriage-morn.  Marriage had had of old but too little to say to the matter: for the girl who was to have been his bride there had been no bridal embrace.  She had died of a malignant fever after the wedding-day had been fixed, and he had lost before fairly tasting it an affection that promised to fill his life to the brim.

Of that benediction, however, it would have been false to say this life could really be emptied: it was still ruled by a pale ghost, still ordered by a sovereign presence.  He had not been a man of numerous passions, and even in all these years no sense had grown stronger with him than the sense of being bereft.  He had needed no priest and no altar to make him for ever widowed.  He had done many things in the world—he had done almost all but one: he had never, never forgotten.  He had tried to put into his existence whatever else might take up room in it, but had failed to make it more than a house of which the mistress was eternally absent.  She was most absent of all on the recurrent December day that his tenacity set apart.  He had no arranged observance of it, but his nerves made it all their own.  They drove him forth without mercy, and the goal of his pilgrimage was far.  She had been buried in a London suburb, a part then of Nature’s breast, but which he had seen lose one after another every feature of freshness.  It was in truth during the moments he stood there that his eyes beheld the place least.  They looked at another image, they opened to another light.  Was it a credible future?  Was it an incredible past?  Whatever the answer it was an immense escape from the actual.

It’s true that if there weren’t other dates than this there were other memories; and by the time George Stransom was fifty-five such memories had greatly multiplied.  There were other ghosts in his life than the ghost of Mary Antrim.  He had perhaps not had more losses than most men, but he had counted his losses more; he hadn’t seen death more closely, but had in a manner felt it more deeply.  He had formed little by little the habit of numbering his Dead: it had come to him early in life that there was something one had to do for them.  They were there in their simplified intensified essence, their conscious absence and expressive patience, as personally there as if they had only been stricken dumb.  When all sense of them failed, all sound of them ceased, it was as if their purgatory were really still on earth: they asked so little that they got, poor things, even less, and died again, died every day, of the hard usage of life.  They had no organised service, no reserved place, no honour, no shelter, no safety.  Even ungenerous people provided for the living, but even those who were called most generous did nothing for the others.  So on George Stransom’s part had grown up with the years a resolve that he at least would do something, do it, that is, for his own—would perform the great charity without reproach.  Every man had his own, and every man had, to meet this charity, the ample resources of the soul....