The Albany Depot : a Farce 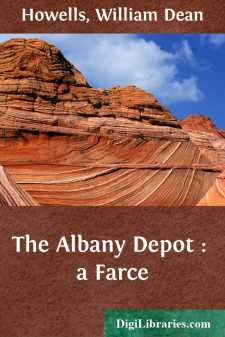 Mrs. Roberts, with many proofs of an afternoon's shopping in her hands and arms, appears at the door of the ladies' room, opening from the public hall, and studies the interior with a searching gaze, which develops a few suburban shoppers scattered over the settees, with their bags and packages, and two or three old ladies in the rocking-chairs. The Chorewoman is going about with a Saturday afternoon pail and mop, and profiting by the disoccupation of the place in the hour between the departures of two great expresses, to wipe up the floor. She passes near the door where Mrs. Roberts is standing, and Mrs. Roberts appeals to her in the anxiety which her failure to detect the object of her search has awakened: "Oh, I was just looking for my husband. He was to meet me here at ten minutes past three; but there don't seem to be any gentlemen."

Mrs. Roberts: "I was just looking for my husband. He was to meet me here at ten minutes past three; but there don't seem to be any gentlemen. You haven't happened to notice—"

The Chorewoman: "There's a gentleman over there beyant, readin', that's just come in. He seemed to be lukun' for somebody." She applies the mop to the floor close to Mrs. Roberts's skirts.

Mrs. Roberts, bending to the right and to the left, and then, by standing on tiptoe, catching sight of a hat round a pillar: "Then it's Mr. Roberts, of course. I'll just go right over to him. Thank you ever so much. Don't disturb yourself!" She picks her way round the area of damp left by the mop, and approaches the hat from behind. "It is you, Edward! What a horrid idea I had! I was just going to touch your hat from behind, for fun; but I kept myself from it in time."

Roberts, looking up with a dazed air from the magazine in his hand: "Why, what would have happened?"

Mrs. Roberts: "Oh, you know it mightn't have been you."

Mrs. Roberts: "Yes, I know; and I was perfectly sure of it; you're always so prompt, and I always wonder at it, such an absent-minded creature as you are. But you came near spoiling everything by getting here behind this pillar, and burying yourself in your book that way. If it hadn't been for my principle of always asking questions, I never should have found you in the world. But just as I was really beginning to despair, the Chorewoman came by, and I asked her if she had seen any gentleman here lately; and she said there was one now, over here, and I stretched up and saw you. I had such a fright for a moment, not seeing you; for I left my little plush bag with my purse in it at Stearns's, and I've got to hurry right back; though I'm afraid they'll be shut when I get there, Saturday afternoon, this way; but I'm going to rattle at the front door, and perhaps they'll come—they always stay, some of them, to put the goods away; and I can tell them I don't want to buy anything, but I left my bag with my purse in it, and I guess they'll let me in. I want you to keep these things for me, Edward; and I'll leave my shopping-bag; I sha'n't want it any more....