The Agrarian Crusade; a chronicle of the farmer in politics 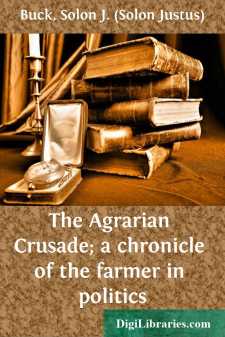 CHAPTER I. THE INCEPTION OF THE GRANGE

When President Johnson authorized the Commissioner of Agriculture, in 1866, to send a clerk in his bureau on a trip through the Southern States to procure "statistical and other information from those States," he could scarcely have foreseen that this trip would lead to a movement among the farmers, which, in varying forms, would affect the political and economic life of the nation for half a century. The clerk selected for this mission, one Oliver Hudson Kelley, was something more than a mere collector of data and compiler of statistics: he was a keen observer and a thinker. Kelley was born in Boston of a good Yankee family that could boast kinship with Oliver Wendell Holmes and Judge Samuel Sewall. At the age of twenty-three he journeyed to Iowa, where he married. Then with his wife he went on to Minnesota, settled in Elk River Township, and acquired some first-hand familiarity with agriculture. At the time of Kelley's service in the agricultural bureau he was forty years old, a man of dignified presence, with a full beard already turning white, the high broad forehead of a philosopher, and the eager eyes of an enthusiast. "An engine with too much steam on all the time"—so one of his friends characterized him; and the abnormal energy which he displayed on the trip through the South justifies the figure.

Kelley had had enough practical experience in agriculture to be sympathetically aware of the difficulties of farm life in the period immediately following the Civil War. Looking at the Southern farmers not as a hostile Northerner would but as a fellow agriculturist, he was struck with the distressing conditions which prevailed. It was not merely the farmers' economic difficulties which he noticed, for such difficulties were to be expected in the South in the adjustment after the great conflict; it was rather their blind disposition to do as their grandfathers had done, their antiquated methods of agriculture, and, most of all, their apathy. Pondering on this attitude, Kelley decided that it was fostered if not caused by the lack of social opportunities which made the existence of the farmer such a drear monotony that he became practically incapable of changing his outlook on life or his attitude toward his work.

Being essentially a man of action, Kelley did not stop with the mere observation of these evils but cast about to find a remedy. In doing so, he came to the conclusion that a national secret order of farmers resembling the Masonic order, of which he was a member, might serve to bind the farmers together for purposes of social and intellectual advancement. After he returned from the South, Kelley discussed the plan in Boston with his niece, Miss Carrie Hall, who argued quite sensibly that women should be admitted to full membership in the order, if it was to accomplish the desired ends. Kelley accepted her suggestion and went West to spend the summer in farming and dreaming of his project. The next year found him again in Washington, but this time as a clerk in the Post Office Department....