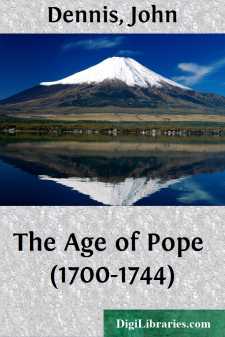 The death of John Dryden, on the first of May, 1700, closed a period of no small significance in the history of English literature. His faults were many, both as a man and as a poet, but he belongs to the race of the giants, and the impress of greatness is stamped upon his works. No student of Dryden can fail to mark the force and sweep of an intellect impatient of restraint. His 'long-resounding march' reminds us of a turbulent river that overflows its banks, and if order and perfection of art are sometimes wanting in his verse, there is never the lack of power. Unfortunately many of the best years of his life were devoted to a craft in which he was working against the grain. His dramas, with one or two noble exceptions, are comparative failures, and in them he too often

'Profaned the God-given strength, and marred the lofty line.'

In two prominent respects his influence on his successors is of no slight significance. As a satirist Pope acknowledged the master he was unable to excel, and so did many of the eighteenth century versemen, who appear to have looked upon satire as the beginning and the end of poetry. Moreover Dryden may be regarded, without much exaggeration, as the father of modern prose. Nothing can be more lucid than his style, which is at once bright and strong, idiomatic and direct. He knows precisely what he has to say, and says it in the simplest words. It is the form and not the substance of Dryden's prose to which attention is drawn here. There is a splendour of imagery, a largeness of thought, and a grasp of language in the prose of Hooker, of Jeremy Taylor, and of Milton which is beyond the reach of Dryden, but he has the merit of using a simple form of English free from prolonged periods and classical constructions, and fitted therefore for common use. The wealthy baggage of the prose Elizabethans and their immediate successors was too cumbersome for ordinary travel; Dryden's riches are less massive, but they can be easily carried, and are always ready for service.

In these respects he is the literary herald of a century which, in the earlier half at least, is remarkable in the use it makes of our mother tongue for the exercise of common sense. The Revolution of 1688 produced a change in English politics scarcely more remarkable than the change that took place a little later in English literature and is to be seen in the poets and wits who are known familiarly as the Queen Anne men. It will be obvious to the most superficial student that the gulf which separates the literary period, closing with the death of Milton in 1674, from the first half of the eighteenth century, is infinitely wider than that which divides us from the splendid band of poets and prose writers who made the first twenty years of the present century so famous. There is, for example, scarcely more than fifty years between the publication of Herrick's Hesperides and of Addison's Campaign, between the Holy Living of Taylor and the Tatler of Steele, and less than fifty years between Samson Agonistes, which Bishop Atterbury asked Pope to polish, and the poems of Prior....