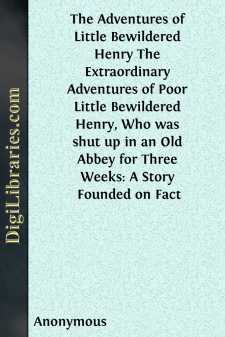 "Well, she's gone into the wood there; and, if you don't make haste and run after her, a big pig that's there under the tree, all bloody, with long ears and cocked tail, will eat her. Run, my boy: that's right: run, now, run."

Poor little Henry, much more alarmed for his mamma than for himself, flew into the wood with the hope of saving her; and having run a good way without stopping, calling all the time for his dear mamma, he tripped against a tree and fell: but quickly recovering, he stood up and continued his race, till, quite exhausted, he sat down on the grass, and there continued panting and crying bitterly. At last, he turned round; and what should he see, to his great joy, but his favourite dog Fidelle. "O, Fidelle! Fidelle!" said the baby, hugging his little arms round the dog's neck, "O! where's mamma? and where's papa? and where's nurse? Where, Fidelle? cannot you tell me where?" But having received no answer, he stood up, and again commenced his journey, and Fidelle ran on before; and it was astonishing what a length of way the baby walked, till, at last, he came to the foot of a high mountain.

And now night came on, and the wind blew strong and cold; and little Henry, quite bewildered, turned into a narrow path, shaded by oak, and elm, and sycamore trees, and the baby again tripped against the root of one of them, and fell; and his little hand came against a stone, and he was much hurt, and his heart beat, and the tears streamed down one of the prettiest little faces that ever was seen, and the wind blew his pretty hair off his forehead, and it would go to your very heart to hear his little mournful cry, calling out for his mamma, his own dear mamma.

At length, the moon arose in great splendour, and little Henry saw at a distance an old abbey, all covered with ivy, and looking so dark and dismal, it would frighten any one from going in. But Henry's little heart, occupied by the idea of his mamma, and with grief that he could not find her, felt no fear; but walking in, he saw a cell in the corner that looked like a baby-house, and, with Fidelle by his side, he bent his little steps towards it, and seating himself on a stone, he leaned his pretty head against the old wall, and fell fast asleep.

Overcome with fatigue, the sweet baby slept soundly till morning; but when he awoke Fidelle was gone, and he felt very hungry. And he again set up his little cry, "Oh, mamma!...