The Adventures of Johnny Chuck 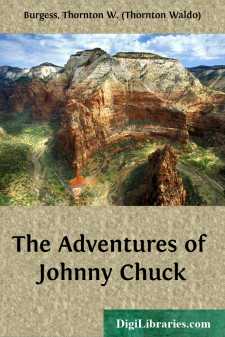 "Good news, good news for every one, above or down below,For Master Winsome Bluebird's come to whistle off the snow!"

All the Green Meadows and all the Green Forest had heard the news. Peter Rabbit had seen to that. And just as soon as each of the little meadow and forest folks heard it, he hurried out to listen for himself and make sure that it was true. And each, when he heard that sweet voice of Winsome Bluebird, had kicked up his heels and shouted "Hurrah!"

You see they all knew that Winsome Bluebird never is very far ahead of gentle Sister South Wind, and that when she arrives, blustering, rough Brother North Wind is already on his way back to the cold, cold land where the ice never melts.

Of course Winsome Bluebird doesn't really whistle off the snow, but after he comes, the snow disappears so fast that it seems as if he did. It is surprising what a difference a little good news makes. Of course nothing had really changed that first day when Winsome Bluebird's whistle was heard on the Green Meadows and in the Green Forest, but it seemed as if everything had changed. And it was all because that sweet whistle was a promise, a promise that every one knew would come true. And so there was joy in all the hearts on the Green Meadows and in the Green Forest. Even grim old Granny Fox felt it, and as for Reddy Fox, why, Reddy even shouted good-naturedly to Peter Rabbit and hoped he was feeling well.

And then gentle Sister South Wind arrived. She came in the night, and in the morning there she was, hard at work making the Green Meadows and the Green Forest ready for Mistress Spring. She broke the icy bands that had bound the Smiling Pool and the Laughing Brook so long; and the Smiling Pool began to smile once more, and the Laughing Brook to gurgle and then to laugh and finally to sing merrily.

She touched the little banks of snow that remained, and straightway they melted and disappeared. She kissed the eight babies of Unc' Billy Possum, and they kicked off the bedclothes under which old Mrs. Possum had tucked them and scrambled out of the big hollow tree to play.

She peeped in at the door of Johnny Chuck and called softly, and Johnny Chuck awoke from his long sleep and yawned and began to think about getting up. She knocked at the door of Digger the Badger, and Digger awoke. She tickled the nose of Striped Chipmunk, who was about half awake, and Striped Chipmunk sneezed and then he hopped out of bed and hurried up to his doorway to shout good morning after her, as she hurried over to see if Bobby Coon was still sleeping.

Peter Rabbit followed her about. He couldn't understand it at all. Peter had smiled to himself when he heard how softly she had called at the doorway of Johnny Chuck's house, for many and many a time during the long winter Peter had stopped at Johnny Chuck's house and shouted down the long hall at the top of his voice without once waking Johnny Chuck. Now Peter nearly tumbled over with surprise, as he heard Johnny Chuck yawn at the first low call of gentle Sister South Wind....