The Adventures of Ann Stories of Colonial Times 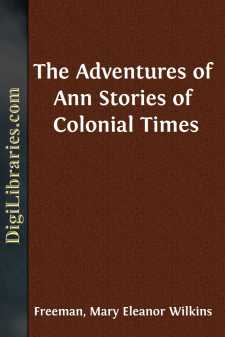 I The Bound Girl

This Indenture Wittnesseth, That I Margaret Burjust of Boston, in the County of Suffolk and Province of the Massachusetts Bay in New England. Have placed, and by these presents do place and bind out my only Daughter whose name is Ann Ginnins to be an Apprentice unto Samuel Wales and his wife of Braintree in the County afores:d, Blacksmith. To them and their Heirs and with them the s:d Samuel Wales, his wife and their Heirs, after the manner of an apprentice to dwell and Serve from the day of the date hereof for and during the full and Just Term of Sixteen years, three months and twenty-three day's next ensueing and fully to be Compleat, during all which term the s:d apprentice her s:d Master and Mistress faithfully Shall Serve, Their Secrets keep close, and Lawful and reasonable Command everywhere gladly do and perform.

Damage to her s:d Master and Mistress she shall not willingly do. Her s:d Master's goods she shall not waste, Embezel, purloin or lend unto Others nor suffer the same to be wasted or purloined. But to her power Shall discover the Same to her s:d Master. Taverns or Ailhouss she Shall not frequent, at any unlawful game She Shall not play, Matrimony she Shall not Contract with any persons during s:d Term. From her master's Service She Shall not at any time unlawfully absent herself. But in all things as a good honest and faithful Servant and apprentice Shall bear and behave herself, During the full term afores:d Commencing from the third day of November Anno Dom: One Thousand, Seven Hundred fifty and three. And the s:d Master for himself, wife, and Heir's, Doth Covenant Promise Grant and Agree unto and with the s:d apprentice and the s:d Margaret Burjust, in manner and form following. That is to say, That they will teach the s:d apprentice or Cause her to be taught in the Art of good housewifery, and also to read and write well. And will find and provide for and give unto s:d apprentice good and sufficient Meat Drink washing and lodging both in Sickness and in health, and at the Expiration of S:d term to Dismiss s:d apprentice with two Good Suits of Apparrel both of woolen and linnin for all parts of her body (viz) One for Lord-days and one for working days Suitable to her Quality. In Testimony whereof I Samuel Wales and Margaret Burjust Have Interchangably Sett their hands and Seals this Third day November Anno Dom: 1753, and in the twenty Seventh year of the Reign of our Soveraig'n Lord George the Second of great Britain the King. Signed Sealed & Delivered.  In presence of  Sam Vaughan                Margaret Burgis  Mary Vaughan                  her X mark.”

This quaint document was carefully locked up, with some old deeds and other valuable papers, in his desk, by the “s:d Samuel Wales,” one hundred and thirty years ago. The desk was a rude, unpainted pine affair, and it reared itself on its four stilt-like legs in a corner of his kitchen, in his house in the South Precinct of Braintree....