The Advance of Science in the Last Half-Century 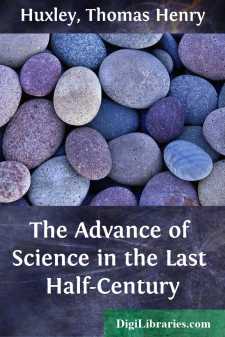 The most obvious and the most distinctive features of the History of Civilisation, during the last fifty years, is the wonderful increase of industrial production by the application of machinery, the improvement of old technical processes and the invention of new ones, accompanied by an even more remarkable development of old and new means of locomotion and intercommunication. By this rapid and vast multiplication of the commodities and conveniences of existence, the general standard of comfort has been raised, the ravages of pestilence and famine have been checked, and the natural obstacles, which time and space offer to mutual intercourse, have been reduced in a manner, and to an extent, unknown to former ages. The diminution or removal of local ignorance and prejudice, the creation of common interests among the most widely separated peoples, and the strengthening of the forces of the organisation of the commonwealth against those of political or social anarchy, thus effected, have exerted an influence on the present and future fortunes of mankind the full significance of which may be divined, but cannot, as yet, be estimated at its full value.

caused by the increase of physical science

This revolution—for it is nothing less—in the political and social aspects of modern civilisation has been preceded, accompanied, and in great measure caused, by a less obvious, but no less marvellous, increase of natural knowledge, and especially of that part of it which is known as Physical Science, in consequence of the application of scientific method to the investigation of the phenomena of the material world. Not that the growth of physical science is an exclusive prerogative of the Victorian age. Its present strength and volume merely indicate the highest level of a stream which took its rise, alongside of the primal founts of Philosophy, Literature, and Art, in ancient Greece; and, after being dammed up for a thousand years, once more began to flow three centuries ago.

It may be doubted if even-handed justice, as free from fulsome panegyric as from captious depreciation, has ever yet been dealt out to the sages of antiquity who, for eight centuries, from the time of Thales to that of Galen, toiled at the foundations of physical science. But, without entering into the discussion of that large question, it is certain that the labors of these early workers in the field of natural knowledge were brought to a standstill by the decay and disruption of the Roman Empire, the consequent disorganisation of society, and the diversion of men's thoughts from sublunary matters to the problems of the supernatural world suggested by Christian dogma in the Middle Ages. And, notwithstanding sporadic attempts to recall men to the investigation of nature, here and there, it was not until the fifteenth and sixteenth centuries that physical science made a new start, founding itself, at first, altogether upon that which had been done by the Greeks. Indeed, it must be admitted that the men of the Renaissance, though standing on the shoulders of the old philosophers, were a long time before they saw as much as their forerunners had done.

The first serious attempts to carry further the unfinished work of Archimedes, Hipparchus, and Ptolemy, of Aristotle and of Galen, naturally enough arose among the astronomers and the physicians. For the imperious necessity of seeking some remedy for the physical ills of life had insured the preservation of more or less of the wisdom of Hippocrates and his successors, and, by a happy conjunction of circumstances, the Jewish and the Arabian physicians and philosophers escaped many of the influences which, at that time, blighted natural knowledge in the Christian world. On the other hand, the superstitious hopes and fears which afforded countenance to astrology and to alchemy also sheltered astronomy and the germs of chemistry. Whether for this, or for some better reason, the founders of the schools of the Middle Ages included astronomy, along with geometry, arithmetic, and music, as one of the four branches of advanced education; and, in this respect, it is only just to them to observe that they were far in advance of those who sit in their seats....