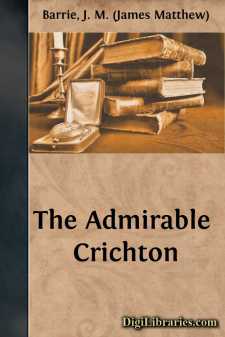 ACT I. AT LOAM HOUSE, MAYFAIR

A moment before the curtain rises, the Hon. Ernest Woolley drives up to the door of Loam House in Mayfair. There is a happy smile on his pleasant, insignificant face, and this presumably means that he is thinking of himself. He is too busy over nothing, this man about town, to be always thinking of himself, but, on the other hand, he almost never thinks of any other person. Probably Ernest's great moment is when he wakes of a morning and realises that he really is Ernest, for we must all wish to be that which is our ideal. We can conceive him springing out of bed light-heartedly and waiting for his man to do the rest. He is dressed in excellent taste, with just the little bit more which shows that he is not without a sense of humour: the dandiacal are often saved by carrying a smile at the whole thing in their spats, let us say. Ernest left Cambridge the other day, a member of The Athenaeum (which he would be sorry to have you confound with a club in London of the same name). He is a bachelor, but not of arts, no mean epigrammatist (as you shall see), and a favourite of the ladies. He is almost a celebrity in restaurants, where he dines frequently, returning to sup; and during this last year he has probably paid as much in them for the privilege of handing his hat to an attendant as the rent of a working-man's flat. He complains brightly that he is hard up, and that if somebody or other at Westminster does not look out the country will go to the dogs. He is no fool. He has the shrewdness to float with the current because it is a labour-saving process, but he has sufficient pluck to fight, if fight he must (a brief contest, for he would soon be toppled over). He has a light nature, which would enable him to bob up cheerily in new conditions and return unaltered to the old ones. His selfishness is his most endearing quality. If he has his way he will spend his life like a cat in pushing his betters out of the soft places, and until he is old he will be fondled in the process.

He gives his hat to one footman and his cane to another, and mounts the great staircase unassisted and undirected. As a nephew of the house he need show no credentials even to Crichton, who is guarding a door above.

It would not be good taste to describe Crichton, who is only a servant; if to the scandal of all good houses he is to stand out as a figure in the play, he must do it on his own, as they say in the pantry and the boudoir.

We are not going to help him. We have had misgivings ever since we found his name in the title, and we shall keep him out of his rights as long as we can. Even though we softened to him he would not be a hero in these clothes of servitude; and he loves his clothes. How to get him out of them? It would require a cataclysm. To be an indoor servant at all is to Crichton a badge of honour; to be a butler at thirty is the realisation of his proudest ambitions. He is devotedly attached to his master, who, in his opinion, has but one fault, he is not sufficiently contemptuous of his inferiors....