The Academy Keeper Or Variety of useful Directions Concerning the Management of an Academy, The Terms, Diet, Lodging, Recreation, Discipline, and Instruction of Young Gentlemen. With the Proper Methods of addressing Parents and Guardians of all Ranks and Conditions 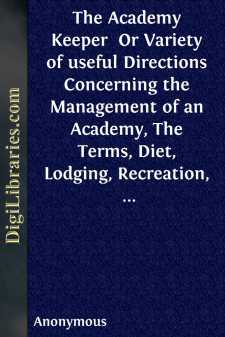 After many unsuccessful experiments, made some years ago, to retrieve a declining fortune, I was lucky enough at last to marry the mistress of a boarding-school: her circumstances were not, indeed, at the time of our marriage, very considerable. But as I was neither unacquainted with the world, nor the more useful sciences, by a peculiar attention to the tempers of the boys, and the dispositions of their parents, by a flexibility of face, for which I was always remarkable, the assistance of a northern degree, and a tolerable share of assiduity; I soon accumulated a large fortune with credit. My eldest daughter I afterwards married to a favourite usher, resigned to him the school, and for his service drew up most of the following rules. After his decease I favoured many others with a copy, who adhered to them with equally great advantage, and added a few to their number: I therefore should not acquit myself properly as a citizen of the world, if I did not give every one an opportunity of seeing them who may have occasion to use them. Many alterations in the mode of education render them indeed, at this time, peculiarly necessary.

Mothers, not school-masters, have with great propriety of late, the sole direction of their children's studies; as also what punishments shall be inflicted on them; what diversions must be allowed them; what degree of insolence they may express to their ushers; and what liberties they may take with their school-fellows. These are circumstances formerly unknown, and many, by a too great inattention to them, and an adherence to the ancient plan, have lately been ruined.

There is another inducement to the publication of these rules, which I must not suppress. The cause of learning declines with the reputation of its friends. And if we enquire, why the character of an Academy-Keeper is treated with such general contempt, we shall not find the true causes to be either superciliousness, pedantry, ignorance, or venality, as the world maliciously insinuates, but the modesty of these people, and their disinterested probity; by the former of which they have unhappily prevented the world from being acquainted with their merit, and by the latter prevented themselves from emerging out of a state of poverty and raggedness, which in these golden days cannot be expected to find much courtesy in the world. In retrieving therefore their fortunes, we may not only re-establish their characters, but administer relief to learning and science, which have been wounded through their sides.

Nor were these my only motives for publishing these papers. Another, and very considerable one, was the good of the public. The parents of these times seem duly sensible of the advantages of a good education, and are rather desirous of having their children instructed in the different branches of polite literature, and genteel deportment, than acquainted with the crabbed writers of antiquity, or the useless distinctions and discoveries of modern philosophical subtlety....