That Gospel Sermon on the Blessed Hope 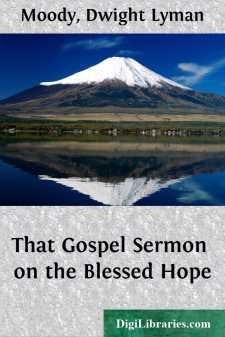 In 2 Timothy, 3:16, Paul declares: "All scripture is given by inspiration of God, and is profitable for doctrine, for reproof, for correction, for instruction in righteousness;" but there are some people who tell us when we take up prophecy that it is all very well to be believed, but that there is no use in one trying to understand it; these future events are things that the church does not agree about, and it is better to let them alone, and deal only with those prophecies which have already been fulfilled. But Paul does not talk that way; he says: "All scripture is ... profitable for doctrine." If these people are right, he ought to have said: "Some scripture is profitable; but you can not understand the prophecies, so you had better let them alone." If God did not mean to have us study the prophecies, he would not have put them in the Bible. Some of them are fulfilled, and he is at work fulfilling the rest, so that if we do not see them all completed in this life, we shall in the world to come.

I do not want to teach anything to-day dogmatically, on my own authority, but to my mind this precious doctrine--for such I must call it--of the return of the Lord to this earth is taught in the New Testament as clearly as any other doctrine is; yet I was in the church fifteen or sixteen years before I ever heard a sermon on it. There is hardly any church that does not make a great deal of baptism, but the New Testament only speaks about baptism thirteen times, while it speaks of the return of our Lord fifty times; and yet the church has had very little to say about it. Now, I can see a reason for this: the devil does not want us to see this truth, for nothing would wake up the church so much. The moment a man takes hold of the truth that Jesus Christ is coming back again to receive his friends to himself, this world loses its hold upon him; gas-stocks and water-stocks, and stocks in banks and horse-railroads, are of very much less consequence to him then. His heart is free, and he looks for the blessed appearing of his Lord, who at his coming will take him into his blessed kingdom.

In 2 Peter 1:20, we read: "No prophecy of the scripture is of any private interpretation." Some people say: "O yes, the prophecies are all well enough for the priests and doctors, but not for the rank and file of the church." But Peter says: "The prophecy came not by the will of man, but holy men spake as they were moved by the Holy Ghost," and those men are the very ones who tell us of the return of our Lord. Look at Daniel 2:45, where he tells the meaning of that stone which the king saw in his dream that was cut out of the mountain without hands, and that broke in pieces the iron, the brass, the clay, the silver, and the gold. "The dream is certain and the interpretation thereof sure," says Daniel. Now we have seen the fulfillment of that prophecy all but the closing part of it. The kingdoms of Babylon and Medo-Persia and Greece and Rome have all been broken in pieces, and now it only remains for this stone cut out of the mountain without hands to smite the image and break it in pieces till it becomes like the dust of the summer threshing floor, and for this stone to become a great mountain and fill the whole earth.

BUT HOW IS HE GOING TO COME?

We are told how he is going to come. When those disciples stood looking up into heaven at the time of his ascension, there appeared two angels, who said Acts 1:11: "Ye men of Galilee, why stand ye gazing up into heaven? This same Jesus which is taken up from you into heaven shall so come in like manner as ye have seen him go into heaven." How did he go up? He took his flesh and bones up with him. "Look at me; handle me; give me something to eat; a spirit hath not flesh and bones as ye see me have; I am the identical one whom they crucified and laid in the grave. Now I am risen from the dead and am going up to heaven," Luke 24:39,43. He is gone, say the angels, but he will come again just as he went. An angel was sent to announce his birth of the virgin; angels sang of his advent in Bethlehem; an angel told the women of his resurrection; and two angels told the disciples of his coming again....