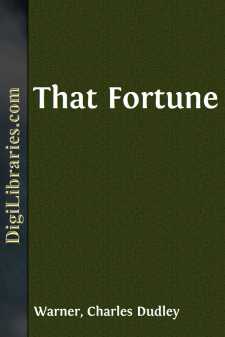 On a summer day, long gone among the summer days that come but to go, a lad of twelve years was idly and recklessly swinging in the top of a tall hickory, the advance picket of a mountain forest. The tree was on the edge of a steep declivity of rocky pasture-land that fell rapidly down to the stately chestnuts, to the orchard, to the cornfields in the narrow valley, and the maples on the bank of the amber river, whose loud, unceasing murmur came to the lad on his aerial perch like the voice of some tradition of nature that he could not understand.

He had climbed to the topmost branch of the lithe and tough tree in order to take the full swing of this free creature in its sport with the western wind. There was something exhilarating in this elemental battle of the forces that urge and the forces that resist, and the harder the wind blew, and the wider circles he took in the free air, the more stirred the boy was in the spring of his life. Nature was taking him by the hand, and it might be that in that moment ambition was born to achieve for himself, to conquer.

If you had asked him why he was there, he would very likely have said, "To see the world." It was a world worth seeing. The prospect might be limited to a dull eye, but not to this lad, who loved to climb this height, in order to be with himself and indulge the dreams of youth. Any pretense would suffice for taking this hour of freedom: to hunt for the spicy checker-berries and the pungent sassafras; to aggravate the woodchucks, who made their homes in mysterious passages in this gravelly hillside; to get a nosegay of columbine for the girl who spelled against him in school and was his gentle comrade morning and evening along the river road where grew the sweet-flag and the snap-dragon and the barberry bush; to make friends with the elegant gray squirrel and the lively red squirrel and the comical chipmunk, who were not much afraid of this unarmed naturalist. They may have recognized their kinship to him, for he could climb like any squirrel, and not one of them could have clung more securely to this bough where he was swinging, rejoicing in the strength of his lithe, compact little body. When he shouted in pure enjoyment of life, they chattered in reply, and eyed him with a primeval curiosity that had no fear in it. This lad in short trousers, torn shirt, and a frayed straw hat above his mobile and cheerful face, might be only another sort of animal, a lover like themselves of the beech-nut and the hickory-nut.

It was a gay world up here among the tossing branches. Across the river, on the first terrace of the hill, were weather-beaten farmhouses, amid apple orchards and cornfields. Above these rose the wooded dome of Mount Peak, a thousand feet above the river, and beyond that to the left the road wound up, through the scriptural land of Bozrah, to high and lonesome towns on a plateau stretching to unknown regions in the south. There was no bar to the imagination in that direction. What a gracious valley, what graceful slopes, what a mass of color bathing this lovely summer landscape! Down from the west, through hills that crowded on either side to divert it from its course, ran the sparkling Deerfield, from among the springs and trout streams of the Hoosac, merrily going on to the great Connecticut. Along the stream was the ancient highway, or lowway, where in days before the railway came the stage-coach and the big transport-wagons used to sway and rattle along on their adventurous voyage from the gate of the Sea at Boston to the gate of the West at Albany....