by Robert B. (Robert Bruce) Douglas 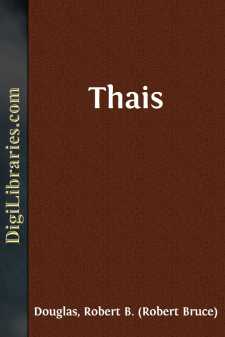 PART THE FIRST — THE LOTUS

In those days there were many hermits living in the desert. On both banks of the Nile numerous huts, built by these solitary dwellers, of branches held together by clay, were scattered at a little distance from each other, so that the inhabitants could live alone, and yet help one another in case of need. Churches, each surmounted by a cross, stood here and there amongst the huts, and the monks flocked to them at each festival to celebrate the services or to partake of the Communion. There were also, here and there on the banks of the river, monasteries, where the cenobites lived in separate cells, and only met together that they might the better enjoy their solitude.

Both hermits and cenobites led abstemious lives, taking no food till after sunset, and eating nothing but bread with a little salt and hyssop. Some retired into the desert, and led a still more strange life in some cave or tomb.

All lived in temperance and chastity; they wore a hair shirt and a hood, slept on the bare ground after long watching, prayed, sang psalms, and, in short, spent their days in works of penitence. As an atonement for original sin, they refused their body not only all pleasures and satisfactions, but even that care and attention which in this age are deemed indispensable. They believed that the diseases of our members purify our souls, and the flesh could put on no adornment more glorious than wounds and ulcers. Thus, they thought they fulfilled the words of the prophet, "The desert shall rejoice and blossom as the rose."

Amongst the inhabitants of the holy Thebaid, there were some who passed their days in asceticism and contemplation; others gained their livelihood by plaiting palm fibre, or by working at harvest-time for the neighbouring farmers. The Gentiles wrongly suspected some of them of living by brigandage, and allying themselves to the nomadic Arabs who robbed the caravans. But, as a matter of fact, the monks despised riches, and the odour of their sanctity rose to heaven.

Angels in the likeness of young men, came, staff in hand, as travellers, to visit the hermitages; whilst demons—having assumed the form of Ethiopians or of animals—wandered round the habitations of the hermits in order to lead them into temptation. When the monks went in the morning to fill their pitcher at the spring, they saw the footprints of Satyrs and Aigipans in the sand. The Thebaid was, really and spiritually, a battlefield, where, at all times, and more especially at night, there were terrible conflicts between heaven and hell.

The ascetics, furiously assailed by legions of the damned, defended themselves—with the help of God and the angels—by fasting, prayer, and penance. Sometimes carnal desires pricked them so cruelly that they cried aloud with pain, and their lamentations rose to the starlit heavens mingled with the howls of the hungry hyaenas. Then it was that the demons appeared in delightful forms. For though the demons are, in reality, hideous, they sometimes assume an appearance of beauty which prevents their real nature from being recognised....