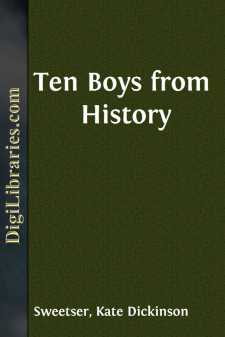 "To the sea of fools

Led the path of the children."

Just a word about the Crusades, or Holy Wars, before we begin our story.

A war is generally a conflict between nations, countries, or individuals, for possession of land or a throne, but the Holy Wars were not such. They were expeditions made by those Christians who were determined to rescue the Sepulchre, or tomb, of Christ and the City of Jerusalem, from the rule of unbelievers.

For eighty-eight years Christian kings ruled in Palestine, then all the land was conquered by the Mohammedans, except a few cities, and the Christians sent out another, and still another, and another expedition to subdue the enemy, but all were useless. The Holy City and the Holy Sepulchre were still in the hands of infidels, who persecuted the pilgrims who visited the Holy Tomb; and the Christians sent a heart-rending cry to all Europe for help, but Europe was slow to answer the appeal, and it was several years after Pope Innocent ordered a new Crusade, before an army departed for the scene of conflict.

It was during this interval that the Children's Crusade or Holy War, took place—of which we are about to read.

But first let us go back to the city of Chartres, on the 25th day of April, 1212, when a surging crowd of men and women is filling every street and by-way of the quaint city.

What are the crowds watching so eagerly? A procession of priests and laymen, carrying banners and black-draped crosses, and chanting in solemn unison as they march.

It is the day of the celebration in Chartres of the "Black Crosses," an old church ceremony instituted centuries before, by Gregory the Great, during the ravages of the Plague, but now celebrated as an appeal to the people to free Jerusalem and the Holy Tomb from the hands of the infidels.

The solemn ranks of the procession move slowly through the streets of Chartres, carrying black-draped symbols of a Saviour's death, chanting deep-toned litanies, and that the old ceremony has lost none of its emotional power is shown by the tears and silence of the watching throngs, while among all the crowd none is more profoundly stirred than a slender shepherd lad from the neighbouring town of Cloyes, who is seeing the ceremony for the first time.

Agile as such a lad should be, and sturdy in consequence of his out-of-door life, Stephen, for that was his name, found it an easy matter to breast the surging tide of spectators following the procession, to slip in where he could to best advantage watch the solemn ceremonies, to stand without fatigue while he drank in all the emotional thrill of the day.

The shrouded crosses, the appeals for rescue of an entombed Christ in the hands of an infidel enemy, the tears and cries of the crowds, worked on the impressionable shepherd lad, unaccustomed to aught but life with his flocks, worked on him so powerfully that he was hot with a desire to rush to Jerusalem and expel the hated Mohammedans from that land and city, once blessed by the living presence of Jesus, and hallowed by the possession of his tomb....