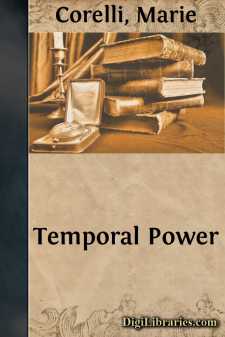 CHAPTER I THE KING'S PLEASAUNCE

"In the beginning," so we are told, "God made the heavens and the earth."

The statement is simple and terse; it is evidently intended to be wholly comprehensive. Its decisive, almost abrupt tone would seem to forbid either question or argument. The old-world narrator of the sublime event thus briefly chronicled was a poet of no mean quality, though moved by the natural conceit of man to give undue importance to the earth as his own particular habitation. The perfect confidence with which he explains 'God' as making 'two great lights, the greater light to rule the day, the lesser light to rule the night,' is touching to the verge of pathos; and the additional remark which he throws in, as it were casually,—'He made the stars also,' cannot but move us to admiration. How childlike the simplicity of the soul which could so venture to deal with the inexplicable and tremendous problem of the Universe! How self-centred and sure the faith which could so arrange the work of Infinite and Eternal forces to suit its own limited intelligence! It is easy and natural to believe that 'God,' or an everlasting Power of Goodness and Beauty called by that name, 'created the heavens and the earth,' but one is often tempted to think that an altogether different and rival element must have been concerned in the making of Man. For the heavens and the earth are harmonious; man is a discord. And not only is he a discord in himself, but he takes pleasure in producing and multiplying discords. Often, with the least possible amount of education, and on the slightest provocation, he mentally sets Himself, and his trivial personal opinion on religion, morals, and government, in direct opposition to the immutable laws of the Universe, and the attitude he assumes towards the mysterious Cause and Original Source of Life is nearly always one of three things; contradiction, negation, or defiance. From the first to the last he torments himself with inventions to outwit or subdue Nature, and in the end dies, utterly defeated. His civilizations, his dynasties, his laws, his manners, his customs, are all doomed to destruction and oblivion as completely as an ant-hill which exists one night and is trodden down the next. Forever and forever he works and plans in vain; forever and forever Nature, the visible and active Spirit of God, rises up and crushes her puny rebel.

There must be good reason for this ceaseless waste of human life,—this constant and steady obliteration of man's attempts, since there can be no Effect without Cause. It is, as if like children at a school, we were set a certain sum to do, and because we blunder foolishly over it and add it up to a wrong total, it is again and again wiped off the blackboard, and again and again rewritten for our more careful consideration. Possibly the secret of our failure to conquer Nature lies in ourselves, and our own obstinate tendency to work in only one groove of what we term 'advancement,'—namely our material self- interest....