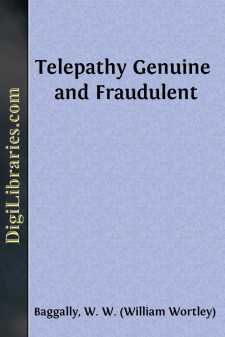 Sir William F. Barrett, one of the founders of the Society for Psychical Research, more than forty years ago tried some experiments which led him to believe that something then new to science, which he provisionally called "thought transference" and which is now known as "telepathy," really existed.

At the first general meeting of the Society, on the 17th July 1882, he read a paper entitled "First Report on Mind Reading."

Since that date the Society has carried out a great number of experiments which tend to show that telepathy is a scientific fact. The evidence for its existence is twofold—that which can be gathered experimentally, and that which arises spontaneously. To the first category belong those experiments in the transmission of the images of drawings or diagrams by means of an effort of the will of a person known as the agent to the mind of another person designated the percipient, when the transmission is carried out otherwise than through the ordinary channel of the senses. To the second category belong those hallucinations of seeing a person at the moment of death or at a crisis, evidence for which has been obtained abundantly by the Society for Psychical Research and has been embodied in the work Phantasms of the Living, and in the Census of Hallucinations—a report on which appeared in the Proceedings of the Society in 1894.

There are several theories to explain the action of telepathy. The first compares it to wireless telegraphy. On this hypothesis it is supposed that it is due to ethereal wave action:—Thought causes motion in the brain cells of the agent, the cells then impart motion to the surrounding ether in the form of waves which impinge on the brain cells of the percipient and give rise to a corresponding thought to that which started the ethereal wave motion.

This theory offers great difficulties. An opponent to it points out that "A wireless message is transmitted by a succession of single ethereal wave impulses produced by the electric sparks at the starting station and received by the coherer at the receiving station, whereas a diagram to be transmitted would require a number of brain-waves produced simultaneously and arranged in the form of the diagram."

Another mode of putting the matter recently advanced is that the agent does not transmit his thought, but that the percipient reads clairvoyantly what is in the agent's mind.

There is also the spiritualistic theory. It is asserted that an external entity, or spirit, conveys the images or thoughts from one mind to another.

Not one of these theories has been accepted as proved by the Society for Psychical Research. In cases of spontaneous telepathy it is now generally believed that the appearance of a person at the time of death or at a crisis is not caused by an objective bodily ghost, but arises from a telepathic impact from the agent formulating itself into his image in the mind of the percipient.

In the case of two persons seeing an apparition at the same time, this may be due to the two percipients receiving each, separately, a telepathic impression, or there may be only one percipient who telepathically impresses the hallucination on the mind of the second person.

I will now proceed to relate some cases of telepathy which have come under my personal observation. My first experiment in the transmission of images of drawings and diagrams took place in the rooms of the Society for Psychical Research in May 1902....