Taxonomic Status of Some Mice of The Peromyscus boylii Group in Eastern Mexico, With Description of a New Subspecies 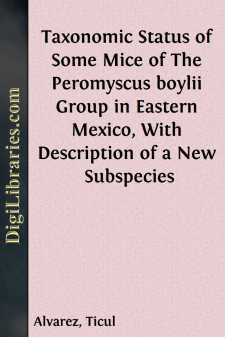 Saussure (1860) described Peromyscus aztecus from southern México. Osgood (1909) by comparison of one of Saussure's specimens with some from Mirador, Veracruz, concluded that aztecus was a subspecies of P. boylii. Dalquest (1953) incorrectly reported specimens of P. boylii from San Luis PotosÃ­ as P. b. aztecus. Merriam (1898) named Peromyscus levipes from Mt. Malinche, Tlaxcala. Thomas (1903) described from Orizaba, Veracruz, P. beatae, which Osgood (1909) mistakenly thought was indistinguishable from P. boylii levipes. Therefore, Osgood in 1909 in his revision of the genus Peromyscus reported only two subspecies of P. boylii from eastern México: P. b. levipes, and P. b. aztecus. Study of Osgood's and Thomas' material, along with recently collected specimens from the states of eastern México, leads me to conclude that P. aztecus and P. boylii are different species; that P. beatae is a valid subspecies different from P. b. levipes; and finally that specimens of P. boylii from Nuevo León and northwestern Tamaulipas pertain to an hitherto unnamed subspecies.

Geographic distribution.—Known only from Mirador and Jalapa in Veracruz, and Huachinango in Puebla.

Diagnosis.—Size medium for the genus (see measurements); tail about as long as head and body; dorsal coloration near Sayal Brown (capitalized color terms after Ridgway, 1912); sides reddish; underparts Light Buff; tail bicolored but not distinctly so; supraorbital border of skull angular, and bullae pointed anteriorly; anterior half of braincase nearly straight (not rounded) as viewed from above; upper molar series long (4.7-5.0); incisive foramina short in relation to length of skull.

Comparisons.—From Peromyscus boylii, P. aztecus differs as follows: Larger in most parts measured; maxillary tooth-row 4.7-5.0 instead of 4.0-4.6; color brighter on sides (reddish instead of ochraceous); supraorbital border angular instead of rounded; anterior border of zygomatic plate convex in upper half and almost straight in lower half as opposed to nearly straight throughout in boylii; pterygoid fossa broader; bullae more pointed anteriorly and less inflated; mesostyles of upper molars larger; surface between orbital region and nasals convex in lateral view instead of flat.

Remarks.—When Saussure (1860:105) described P. aztecus he did not designate a type or type locality. Osgood (1909:157) designated as lectotype the mounted specimen, in the Geneva Museum, which has the skull inside and of which Saussure figured the molar teeth. Osgood (loc. cit.) examined one of the three specimens (No. 3926 USNM) that Saussure used in describing P. aztecus and found that it agreed "in every respect with recently collected specimens from Mirador, Veracruz, which, in the lack of exact knowledge, may be assumed to be the type locality, as it is certain that some at least of Saussure's specimens were taken near there."

Osgood regarded P. aztecus as a subspecies of P. boylii because of the resemblance between aztecus and P. b. evides, but evides is far removed geographically (occurring only in western México) from aztecus, and is smaller. P. aztecus is larger than any known subspecies of P. boylii, and is not known to intergrade with P. b. levipes or P. b. beatae (with which aztecus occurs sympatrically at Jalapa, Veracruz), the two subspecies of boylii that are found nearest the geographic range of P. aztecus. Also, as mentioned previously, aztecus possesses distinctive characters that distinguish it from all subspecies of boylii. For these reasons I regard aztecus as a distinct species.