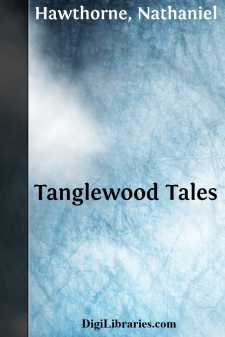 A short time ago, I was favored with a flying visit from my young friend Eustace Bright, whom I had not before met with since quitting the breezy mountains of Berkshire. It being the winter vacation at his college, Eustace was allowing himself a little relaxation, in the hope, he told me, of repairing the inroads which severe application to study had made upon his health; and I was happy to conclude, from the excellent physical condition in which I saw him, that the remedy had already been attended with very desirable success. He had now run up from Boston by the noon train, partly impelled by the friendly regard with which he is pleased to honor me, and partly, as I soon found, on a matter of literary business.

It delighted me to receive Mr. Bright, for the first time, under a roof, though a very humble one, which I could really call my own. Nor did I fail (as is the custom of landed proprietors all about the world) to parade the poor fellow up and down over my half a dozen acres; secretly rejoicing, nevertheless, that the disarray of the inclement season, and particularly the six inches of snow then upon the ground, prevented him from observing the ragged neglect of soil and shrubbery into which the place had lapsed. It was idle, however, to imagine that an airy guest from Monument Mountain, Bald Summit, and old Graylock, shaggy with primeval forests, could see anything to admire in my poor little hillside, with its growth of frail and insect-eaten locust trees. Eustace very frankly called the view from my hill top tame; and so, no doubt, it was, after rough, broken, rugged, headlong Berkshire, and especially the northern parts of the county, with which his college residence had made him familiar. But to me there is a peculiar, quiet charm in these broad meadows and gentle eminences. They are better than mountains, because they do not stamp and stereotype themselves into the brain, and thus grow wearisome with the same strong impression, repeated day after day. A few summer weeks among mountains, a lifetime among green meadows and placid slopes, with outlines forever new, because continually fading out of the memory—such would be my sober choice.

I doubt whether Eustace did not internally pronounce the whole thing a bore, until I led him to my predecessor's little ruined, rustic summer house, midway on the hillside. It is a mere skeleton of slender, decaying tree trunks, with neither walls nor a roof; nothing but a tracery of branches and twigs, which the next wintry blast will be very likely to scatter in fragments along the terrace. It looks, and is, as evanescent as a dream; and yet, in its rustic network of boughs, it has somehow enclosed a hint of spiritual beauty, and has become a true emblem of the subtile and ethereal mind that planned it. I made Eustace Bright sit down on a snow bank, which had heaped itself over the mossy seat, and gazing through the arched windows opposite, he acknowledged that the scene at once grew picturesque.

"Simple as it looks," said he, "this little edifice seems to be the work of magic....