Tancred Or, The New Crusade 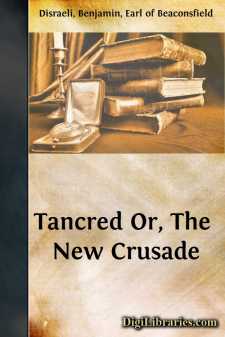 CHAPTER I. A Matter of Importance

IN THAT part of the celebrated parish of St. George which is bounded on one side by Piccadilly and on the other by Curzon Street, is a district of a peculiar character. 'Tis cluster of small streets of little houses, frequently intersected by mews, which here are numerous, and sometimes gradually, rather than abruptly, terminating in a ramification of those mysterious regions. Sometimes a group of courts develops itself, and you may even chance to find your way into a small market-place. Those, however, who are accustomed to connect these hidden residences of the humble with scenes of misery and characters of violence, need not apprehend in this district any appeal to their sympathies, or any shock to their tastes. All is extremely genteel; and there is almost as much repose as in the golden saloons of the contiguous palaces. At any rate, if there be as much vice, there is as little crime.

No sight or sound can be seen or heard at any hour, which could pain the most precise or the most fastidious. Even if a chance oath may float on the air from the stable-yard to the lodging of a French cook, 'tis of the newest fashion, and, if responded to with less of novel charm, the repartee is at least conveyed in the language of the most polite of nations. They bet upon the Derby in these parts a little, are interested in Goodwood, which they frequent, have perhaps, in general, a weakness for play, live highly, and indulge those passions which luxury and refinement encourage; but that is all.

A policeman would as soon think of reconnoitring these secluded streets as of walking into a house in Park Lane or Berkeley Square, to which, in fact, this population in a great measure belongs. For here reside the wives of house-stewards and of butlers, in tenements furnished by the honest savings of their husbands, and let in lodgings to increase their swelling incomes; here dwells the retired servant, who now devotes his practised energies to the occasional festival, which, with his accumulations in the three per cents., or in one of the public-houses of the quarter, secures him at the same time an easy living, and the casual enjoyment of that great world which lingers in his memory. Here may be found his grace's coachman, and here his lordship's groom, who keeps a book and bleeds periodically too speculative footmen, by betting odds on his master's horses. But, above all, it is in this district that the cooks have ever sought a favourite and elegant abode. An air of stillness and serenity, of exhausted passions and suppressed emotion, rather than of sluggishness and of dullness, distinguishes this quarter during the day.

When you turn from the vitality and brightness of Piccadilly, the park, the palace, the terraced mansions, the sparkling equipages, the cavaliers cantering up the hill, the swarming multitude, and enter the region of which we are speaking, the effect is at first almost unearthly. Not a carriage, not a horseman, scarcely a passenger; there seems some great and sudden collapse in the metropolitan system, as if a pest had been announced, or an enemy were expected in alarm by a vanquished capital....