Tales of Wonder Every Child Should Know 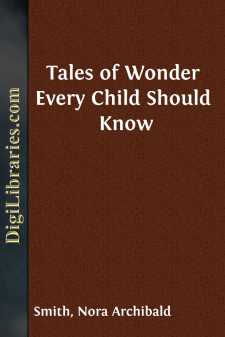 I WONDER! I wonder if in SamarcandGrave camels kneel in golden sand,Still lading bales of magic spellsAnd charms a lover's wisdom tells,To fare across the desert mainAnd bring the Princess home again—I wonder! I wonder in Japan to-dayIf grateful beasts find out the wayTo those who succoured them in pain,And bring their blessings back again;If cranes and sparrows take the shapeAnd all the ways of mortals ape—I wonder! In Bagdad, may there still be foundThat potent powder, finely ground,Which changes all who on it feast,Monarch or slave, to bird or beast?Do Caliphs taste and unafraid,Turn storks, and weeping night-owls aid?I wonder! I wonder if in far CathayThe nightingale still trills her layBeside the Porcelain Palace door,And courtiers praise her as before IIf emperors dream of bygone thingsAnd musing, weep the while she sings—I wonder! Such things have never chanced to me.I wonder if to eyes that seeThese magic visions still appearIn daily living, now and here;If every flower is touched with glory,If e'en the grass-blades tell a story—I wonder!

There is a Chinese tale, known as "The Singing Prisoner," in which a friendless man is bound hand and foot and thrown into a dungeon, where he lies on the cold stones unfed and untended.

He has no hope of freedom and as complaint will avail him nothing, he begins to while away the hours by reciting poems and stories that he had learned in youth. So happily does he vary the tones of the speakers, feigning in turn the voices of kings and courtiers, lovers and princesses, birds and beasts, that he speedily draws all his fellow-prisoners around him, beguiling them by the spell of his genius.

Those who have food, eagerly press it upon him that his strength may be replenished; the jailer, who has been drawn into the charmed circle, loosens his bonds that he may move more freely, and finally grants him better quarters that the stories may be heard to greater advantage. Next the petty officers hear of the prisoner's marvellous gifts and report them everywhere with such effect that the higher authorities at last become interested and grant him a pardon.

Tales like these, that draw children from play and old men from the chimney-corner; that gain the freedom of a Singing Prisoner, and enable a Scheherazade to postpone from night to night her hour of death, are one and all pervaded by the same eternal magic. Pain, grief, terror, care, and bondage are all forgotten for a time when lakes of gems and enchanted waterfalls shimmer in the sunlight, when Rakshas's palaces rise, full-built, before our very eyes, or when Caballero's Knights of the Fish prance away on their magic chargers. "I wonder when!" "I wonder how!" "I wonder where!" we say as we follow them into the land of mystery. So Youngling said when he heard the sound of the mysterious axe in the forest and asked himself who could be chopping there.

"I wonder!" he cried again when he listened to the faerie spade digging and delving at the top of the rocks....