Tales of the Ridings 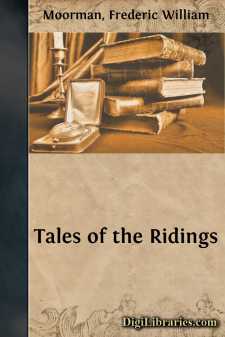 Frederic Moorman came of a stock which, on both sides, had struck deep roots in the soil of Devon. His father's family, which is believed to have sprung ultimately from "either Cornwall or Scotland"—a sufficiently wide choice, it may be thought—had for many generations been settled in the county.(1) His mother's—her maiden name was Mary Honywill—had for centuries held land at Widdicombe and the neighbourhood, in the heart of Dartmoor. He was born on 8th September 1872, at Ashburton, where his father, the Rev. A. C. Moorman, was Congregational minister; and for the first ten years of his life he was brought up on the skirts of the moor to which his mother's family belonged: drinking in from the very first that love of country sights and sounds which clove to him through life, and laying the foundation of that close knowledge of birds and flowers which was an endless source of delight to him in after years, and which made him so welcome a companion in a country walk with any friend who shared his love of such things but who, ten to one, could make no pretence whatever to his knowledge.

In 1882, his father was appointed to the ministry of the Congregational Church at Stonehouse, in Gloucestershire; and Frederic began his formal schooling at the Wyclif Preparatory School in that place. The country round Stonehouse—a country of barish slopes and richly wooded valleys—is perhaps hardly so beautiful as that which he had left and whose memory he never ceased to cherish. But it has a charm all its own, and the child of Dartmoor had no great reason to lament his removal to the grey uplands and "golden valleys" of the Cotswolds.

His next change must have seemed one greatly for the worse. In 1884 he was sent to the school for the sons of Congregational ministers at Caterham; and the Cotswolds, with their wide outlook over the Severn estuary to May Hill and the wooded heights beyond, were exchanged for the bald sweep and the white chalk-pits of the North Downs. These too have their unique beauty; but I never remember to have heard Moorman say anything which showed that he felt it as those who have known such scenery from boyhood might have expected him to do.

After some five years at Caterham, he began his academical studies at University College, London; but, on the strength of a scholarship, soon removed to University College, Aberystwyth (1890), where the scenery—sea, heron-haunted estuaries, wooded down to the very shore, and hills here and there rising almost into mountains—offered surroundings far more congenial to him than the streets and squares of Bloomsbury.

In these new surroundings, he seems to have been exceptionally happy, throwing himself into all the interests of the place, athletic as well as intellectual, and endearing himself both to his teachers and his fellow-students. His friendship with Professor Herford, then Professor of English at Aberystwyth, was one of the chief pleasures of his student days as well as of his after life. Following his natural bent, he decided to study for Honours in English Language and Literature, and at the end of his course (1893) was placed in the Second Class by the examiners for the University of London, to which the Aberystwyth College was at that time affiliated. Those who believe in the virtue of infant prodigies—and, in the country which invented Triposes and Class Lists, it is hard to fix any limit to their number—will be distressed to learn that, in the opinion of those best qualified to judge of such matters, he was not at that time reckoned to be of "exceptionally scholarly calibre." Perhaps this was an omen all the better for his future prospects as a scholar.

It is a wholesome practice that, when the cares of examinations are once safely behind him, a student should widen his experience by a taste of foreign travel. Accordingly, in September, 1893, Moorman betook himself to Strasbourg, primarily for the sake of continuing his studies under the skilful guidance of Ten Brinck. The latter, however, was almost at once called to Berlin and succeeded by Brandl, now himself of the University of Berlin, who actually presided over Moorman's studies for the next two years, and who thought, and never ceased to think, very highly both of his abilities and his acquirements....