Tales of a Traveller 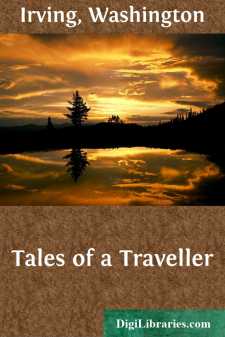 TALES OF A TRAVELLER PART FIRST STRANGE STORIES BY A NERVOUS GENTLEMAN.

I'll tell you more; there was a fish taken,  A monstrous fish, with, a sword by's side, a long sword,  A pike in's neck, and a gun in's nose, a huge gun,  And letters of mart in's mouth, from the Duke of Florence.    Cleanthes. This is a monstrous lie.    Tony. I do confess it.  Do you think I'd tell you truths!

FLETCHER'S WIFE FOR A MONTH.

[The following adventures were related to me by the same nervous gentleman who told me the romantic tale of THE STOUT GENTLEMAN, published in Bracebridge Hall.

It is very singular, that although I expressly stated that story to have been told to me, and described the very person who told it, still it has been received as an adventure that happened to myself. Now, I protest I never met with any adventure of the kind. I should not have grieved at this, had it not been intimated by the author of Waverley, in an introduction to his romance of Peveril of the Peak, that he was himself the Stout Gentleman alluded to. I have ever since been importuned by letters and questions from gentlemen, and particularly from ladies without number, touching what I had seen of the great unknown.

Now, all this is extremely tantalizing. It is like being congratulated on the high prize when one has drawn a blank; for I have just as great a desire as any one of the public to penetrate the mystery of that very singular personage, whose voice fills every corner of the world, without any one being able to tell from whence it comes. He who keeps up such a wonderful and whimsical incognito: whom nobody knows, and yet whom every body thinks he can swear to.

My friend, the nervous gentleman, also, who is a man of very shy, Retired habits, complains that he has been excessively annoyed in consequence of its getting about in his neighborhood that he is the fortunate personage. Insomuch, that he has become a character of considerable notoriety in two or three country towns; and has been repeatedly teased to exhibit himself at blue-stocking parties, for no other reason than that of being "the gentleman who has had a glimpse of the author of Waverley."

Indeed, the poor man has grown ten times as nervous as ever, since he has discovered, on such good authority, who the stout gentleman was; and will never forgive himself for not having made a more resolute effort to get a full sight of him. He has anxiously endeavored to call up a recollection of what he saw of that portly personage; and has ever since kept a curious eye on all gentlemen of more than ordinary dimensions, whom he has seen getting into stage coaches. All in vain! The features he had caught a glimpse of seem common to the whole race of stout gentlemen; and the great unknown remains as great an unknown as ever.]

I was once at a hunting dinner, given by a worthy fox-hunting old Baronet, who kept Bachelor's Hall in jovial style, in an ancient rook-haunted family mansion, in one of the middle counties....