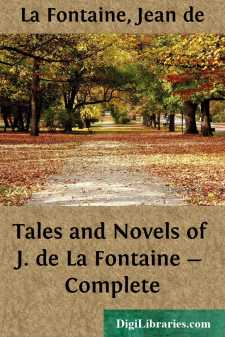 Jean de La Fontaine was born on the 8th of July, 1621, at Chateau-Thierry, and his family held a respectable position there.

His education was neglected, but he had received that genius which makes amends for all. While still young the tedium of society led him into retirement, from which a taste for independence afterwards withdrew him.

He had reached the age of twenty-two, when a few sounds from the lyre of Malherbe, heard by accident, awoke in him the muse which slept.

He soon became acquainted with the best models: Pheedrus, Virgil, Horace and Terence amongst the Latins; Plutarch, Homer and Plato, amongst the Greeks; Rabelais, Marot and d'Urfe, amongst the French; Tasso, Ariosto and Boccaccio, amongst the Italians.

He married, in compliance with the wishes of his family, a beautiful, witty and chaste woman, who drove him to despair.

He was sought after and cherished by all distinguished men of letters. But it was two Ladies who kept him from experiencing the pangs of poverty.

La Fontaine, if there remain anything of thee, and if it be permitted to thee for a moment to soar above all time; see the names of La Sabliere and of Hervard pass with thine to the ages to come!

The life of La Fontaine was, so to speak, only one of continual distraction. In the midst of society, he was absent from it. Regarded almost as an imbecile by the crowd, this clever author, this amiable man, only permitted himself to be seen at intervals and by friends.

He had few books and few friends.

Amongst a large number of works that he has left, everyone knows his fables and his tales, and the circumstances of his life are written in a hundred places.

Let us keep silence about his last moments, for fear of irritating those who never forgive.

His fellow-citizens honour him in his posterity to this day.

Long after his death, foreigners went to visit the room which he had occupied.

Once a year, I shall go to visit his tomb.

On that day, I shall tear up a fable of La Mothe, a tale of Vergier, or several of the best pages of Grecourt.

He was buried in the cemetery of Saint-Joseph, by the side of Moliere.

That spot will always be held sacred by poets and people of taste.

THE AUTHOR'S PREFACE TO THE FIRST VOLUME OF THESE TALES

I had resolved not to consent to the printing of these Tales, until after I had joined to them those of Boccaccio, which are those most to my taste; but several persons have advised me to produce at once what I have remaining of these trifles, in order to prevent from cooling the curiosity to see them, which is still in its first ardour. I gave way to this advice without much difficulty, and I have thought well to profit by the occasion. Not only is that permitted me, but it would be vanity on my part to despise such an advantage. It has sufficed me to wish that no one should be imposed upon in my favour, and to follow a road contrary to that of certain persons, who only make friends in order to gain voices in their favour by their means; creatures of the Cabal, very different from that Spaniard who prided himself on being the son of his own works....