Synge and the Ireland of His Time 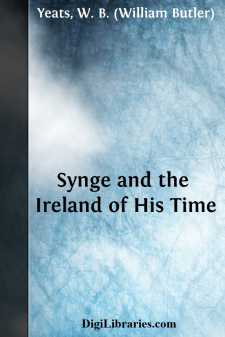 J.M. SYNGE AND THE IRELAND OF HIS TIME

On Saturday, January 26th, 1907, I was lecturing in Aberdeen, and when my lecture was over I was given a telegram which said, 'Play great success.' It had been sent from Dublin after the second Act of 'The Playboy of the Western World,' then being performed for the first time. After one in the morning, my host brought to my bedroom this second telegram, 'Audience broke up in disorder at the word shift.' I knew no more until I got the Dublin papers on my way from Belfast to Dublin on Tuesday morning. On the Monday night no word of the play had been heard. About forty young men had sat on the front seats of the pit, and stamped and shouted and blown trumpets from the rise to the fall of the curtain. On the Tuesday night also the forty young men were there. They wished to silence what they considered a slander upon Ireland's womanhood. Irish women would never sleep under the same roof with a young man without a chaperon, nor admire a murderer, nor use a word like 'shift;' nor could anyone recognise the country men and women of Davis and Kickham in these poetical, violent, grotesque persons, who used the name of God so freely, and spoke of all things that hit their fancy.

A patriotic journalism which had seen in Synge's capricious imagination the enemy of all it would have young men believe, had for years prepared for this hour, by that which is at once the greatest and most ignoble power of journalism, the art of repeating a name again and again with some ridiculous or evil association. The preparation had begun after the first performance of 'The Shadow of the Glen,' Synge's first play, with an assertion made in ignorance but repeated in dishonesty, that he had taken his fable and his characters, not from his own mind nor that profound knowledge of cot and curragh he was admitted to possess, but 'from a writer of the Roman decadence.' Some spontaneous dislike had been but natural, for genius like his can but slowly, amid what it has of harsh and strange, set forth the nobility of its beauty, and the depth of its compassion; but the frenzy that would have silenced his master-work was, like most violent things artificial, the defence of virtue by those that have but little, which is the pomp and gallantry of journalism and its right to govern the world.

As I stood there watching, knowing well that I saw the dissolution of a school of patriotism that held sway over my youth, Synge came and stood beside me, and said, 'A young doctor has just told me that he can hardly keep himself from jumping on to a seat, and pointing out in that howling mob those whom he is treating for venereal disease.'

Thomas Davis, whose life had the moral simplicity which can give to actions the lasting influence that style alone can give to words, had understood that a country which has no national institutions must show its young men images for the affections, although they be but diagrams of what it should be or may be. He and his school imagined the Soldier, the Orator, the Patriot, the Poet, the Chieftain, and above all the Peasant; and these, as celebrated in essay and songs and stories, possessed so many virtues that no matter how England, who as Mitchell said 'had the ear of the world,' might slander us, Ireland, even though she could not come at the world's other ear, might go her way unabashed....