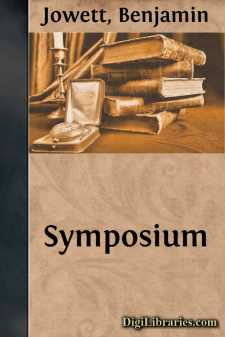 Of all the works of Plato the Symposium is the most perfect in form, and may be truly thought to contain more than any commentator has ever dreamed of; or, as Goethe said of one of his own writings, more than the author himself knew. For in philosophy as in prophecy glimpses of the future may often be conveyed in words which could hardly have been understood or interpreted at the time when they were uttered (compare Symp.)—which were wiser than the writer of them meant, and could not have been expressed by him if he had been interrogated about them. Yet Plato was not a mystic, nor in any degree affected by the Eastern influences which afterwards overspread the Alexandrian world. He was not an enthusiast or a sentimentalist, but one who aspired only to see reasoned truth, and whose thoughts are clearly explained in his language. There is no foreign element either of Egypt or of Asia to be found in his writings. And more than any other Platonic work the Symposium is Greek both in style and subject, having a beauty 'as of a statue,' while the companion Dialogue of the Phaedrus is marked by a sort of Gothic irregularity. More too than in any other of his Dialogues, Plato is emancipated from former philosophies. The genius of Greek art seems to triumph over the traditions of Pythagorean, Eleatic, or Megarian systems, and 'the old quarrel of poetry and philosophy' has at least a superficial reconcilement. (Rep.)

An unknown person who had heard of the discourses in praise of love spoken by Socrates and others at the banquet of Agathon is desirous of having an authentic account of them, which he thinks that he can obtain from Apollodorus, the same excitable, or rather 'mad' friend of Socrates, who is afterwards introduced in the Phaedo. He had imagined that the discourses were recent. There he is mistaken: but they are still fresh in the memory of his informant, who had just been repeating them to Glaucon, and is quite prepared to have another rehearsal of them in a walk from the Piraeus to Athens. Although he had not been present himself, he had heard them from the best authority. Aristodemus, who is described as having been in past times a humble but inseparable attendant of Socrates, had reported them to him (compare Xen. Mem.).

The narrative which he had heard was as follows:—

Aristodemus meeting Socrates in holiday attire, is invited by him to a banquet at the house of Agathon, who had been sacrificing in thanksgiving for his tragic victory on the day previous. But no sooner has he entered the house than he finds that he is alone; Socrates has stayed behind in a fit of abstraction, and does not appear until the banquet is half over. On his appearing he and the host jest a little; the question is then asked by Pausanias, one of the guests, 'What shall they do about drinking? as they had been all well drunk on the day before, and drinking on two successive days is such a bad thing.' This is confirmed by the authority of Eryximachus the physician, who further proposes that instead of listening to the flute-girl and her 'noise' they shall make speeches in honour of love, one after another, going from left to right in the order in which they are reclining at the table....