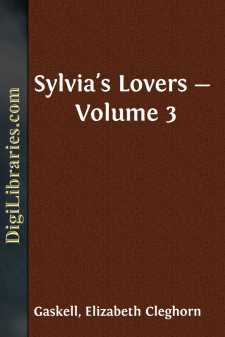 And now Philip seemed as prosperous as his heart could desire. The business flourished, and money beyond his moderate wants came in. As for himself he required very little; but he had always looked forward to placing his idol in a befitting shrine; and means for this were now furnished to him. The dress, the comforts, the position he had desired for Sylvia were all hers. She did not need to do a stroke of household work if she preferred to 'sit in her parlour and sew up a seam'. Indeed Phoebe resented any interference in the domestic labour, which she had performed so long, that she looked upon the kitchen as a private empire of her own. 'Mrs Hepburn' (as Sylvia was now termed) had a good dark silk gown-piece in her drawers, as well as the poor dove-coloured, against the day when she chose to leave off mourning; and stuff for either gray or scarlet cloaks was hers at her bidding.

What she cared for far more were the comforts with which it was in her power to surround her mother. In this Philip vied with her; for besides his old love, and new pity for his aunt Bell, he never forgot how she had welcomed him to Haytersbank, and favoured his love to Sylvia, in the yearning days when he little hoped he should ever win his cousin to be his wife. But even if he had not had these grateful and affectionate feelings towards the poor woman, he would have done much for her if only to gain the sweet, rare smiles which his wife never bestowed upon him so freely as when she saw him attending to 'mother,' for so both of them now called Bell. For her creature comforts, her silk gowns, and her humble luxury, Sylvia did not care; Philip was almost annoyed at the indifference she often manifested to all his efforts to surround her with such things. It was even a hardship to her to leave off her country dress, her uncovered hair, her linsey petticoat, and loose bed-gown, and to don a stiff and stately gown for her morning dress. Sitting in the dark parlour at the back of the shop, and doing 'white work,' was much more wearying to her than running out into the fields to bring up the cows, or spinning wool, or making up butter. She sometimes thought to herself that it was a strange kind of life where there were no out-door animals to look after; the 'ox and the ass' had hitherto come into all her ideas of humanity; and her care and gentleness had made the dumb creatures round her father's home into mute friends with loving eyes, looking at her as if wistful to speak in words the grateful regard that she could read without the poor expression of language.

She missed the free open air, the great dome of sky above the fields; she rebelled against the necessity of 'dressing' (as she called it) to go out, although she acknowledged that it was a necessity where the first step beyond the threshold must be into a populous street.

It is possible that Philip was right at one time when he had thought to win her by material advantages; but the old vanities had been burnt out of her by the hot iron of acute suffering....