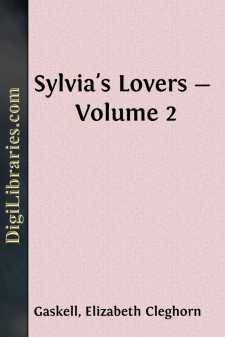 Philip went to bed with that kind of humble penitent gratitude in his heart, which we sometimes feel after a sudden revulsion of feeling from despondency to hope. The night before it seemed as if all events were so arranged as to thwart him in his dearest wishes; he felt now as if his discontent and repining, not twenty-four hours before, had been almost impious, so great was the change in his circumstances for the better. Now all seemed promising for the fulfilment of what he most desired. He was almost convinced that he was mistaken in thinking that Kinraid had had anything more than a sailor's admiration for a pretty girl with regard to Sylvia; at any rate, he was going away to-morrow, in all probability not to return for another year (for Greenland ships left for the northern seas as soon as there was a chance of the ice being broken up), and ere then he himself might speak out openly, laying before her parents all his fortunate prospects, and before her all his deep passionate love.

So this night his prayers were more than the mere form that they had been the night before; they were a vehement expression of gratitude to God for having, as it were, interfered on his behalf, to grant him the desire of his eyes and the lust of his heart. He was like too many of us, he did not place his future life in the hands of God, and only ask for grace to do His will in whatever circumstances might arise; but he yearned in that terrible way after a blessing which, when granted under such circumstances, too often turns out to be equivalent to a curse. And that spirit brings with it the material and earthly idea that all events that favour our wishes are answers to our prayer; and so they are in one sense, but they need prayer in a deeper and higher spirit to keep us from the temptation to evil which such events invariably bring with them.

Philip little knew how Sylvia's time had been passed that day. If he had, he would have laid down this night with even a heavier heart than he had done on the last.

Charley Kinraid accompanied his cousins as far as the spot where the path to Haytersbank Farm diverged. Then he stopped his merry talk, and announced his intention of going to see farmer Robson. Bessy Corney looked disappointed and a little sulky; but her sister Molly Brunton laughed, and said,—

'Indeed, but he would,' replied Charley, rather annoyed; 'when I've said a thing, I do it. I promised last night to go see him; besides, I like the old man.'

'Well! when shall we tell mother yo're comin' whoam?'

'Why it's bare five now! bless t' lad, does he think o' staying theere a' neet, and they up so late last night, and Mrs. Robson ailing beside? Mother 'll not think it kind on yo' either, will she, Bess?'

'I dunno. Charley mun do as he likes; I daresay no one'll miss him if he does bide away till eight.'

'Well, well! I can't tell what I shall do; but yo'd best not stop lingering here, for it's getting on, and there'll be a keen frost by t' look o' the stars.'

Haytersbank was closed for the night as far as it ever was closed; there were no shutters to the windows, nor did they care to draw the inside curtains, so few were the passers-by....