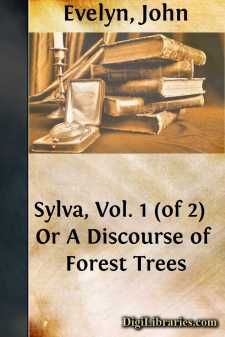 Among the prose writers of the second half of the seventeenth century John Evelyn holds a very distinguished position. The age of the Restoration and the Revolution is indeed rich in many names that have won for themselves an enduring place in the history of English literature. South, Tillotson, and Barrow among theologians, Newton in mathematical science, Locke and Bentley in philosophy and classical learning, Clarendon and Burnet in history, L’Estrange, Butler, Marvell and Dryden in miscellaneous prose, and Temple as an essayist, have all made their mark by prose writings which will endure for all time. But the names which stand out most prominently in popular estimation as authors of great masterpieces in the prose of this period are certainly those of John Bunyan, John Evelyn, and Izaak Walton. And along with them Samuel Pepys is also well entitled to be ranked as a great contemporary writer, though he was at pains to try and ensure his being permitted to remain free from the publicity of authorship, for such time at least as the curious might allow his Diary to remain hidden in the cipher he employed.

With the great though untrained genius of Bunyan none of these other three celebrated prose authors of this time has anything in common. He stands apart from them in his fervently religious and romantic temperament, in his richness of   representation and ingenuity of analogy, and in his forcible quaintness of style, as completely as he did in social status and in personal surroundings. In complete contrast to the romantic productions of the self-educated tinker of Bedford, the works of Walton and Evelyn were at any rate influenced by, though they can hardly be said to have been moulded upon, the style of the preceding age of old English prose writers ending with Milton. The influence of the latter is, indeed, plainly noticeable both in the diction and in the general sentiment of these two great masters of the pure, nervous English of their period.

It would serve no good purpose to make any attempt here to trace the points of resemblance between the works of Walton and Evelyn, and then to note their differences in style. Each has contributed a masterpiece towards our national literature, and it would be a mere waste of time to make comparisons between their chief productions. This much, however, may be remarked, that the conditions under which each worked were completely different from those surrounding the other. Izaak Walton, the author of many singularly interesting biographies, and of the quaint half-poetical Compleat Angler or the Contemplative Man’s Recreation, the great classic “Discourse of Fish and Fishing,” was a London tradesman, while his equally celebrated contemporary John Evelyn, author of Sylva, or a Discourse of Forest Trees, the classic of British Forestry, was a more highly cultured man, who wrote, in the leisure of official duties and amid the surroundings of easy refinement, many useful and tasteful works both in prose and poetry, ranging over a wide variety of subjects. Judging from the number of editions which appeared of their principal works, they were both held in great favour by the reading public, though on the whole the advantage in some respects lay with Evelyn. But during the present century the taste of the public, judged by this same rough and ready, practical standard, has undoubtedly awarded the prize of popularity to Izaac Walton.

So far as the circumstances of their early life were concerned there was greater similarity between Walton and Pepys, than between either of them and Evelyn. Born in the lower middle class, the son of a tailor in London, and himself   afterwards a member of the Clothworkers’ guild, Pepys was a true Londoner. His tastes were centred entirely in the town, and his pleasures were never sought either among woods or green fields, or by the banks of trout streams and rivers. His thoughts seem often tainted with the fumes of the wine-bowl and the reek of the tavern; and even when he swore off drink, as he frequently did, he soon relapsed into his customary habits. Educated in London and then at Cambridge, where his love of a too flowing bowl already got him into trouble more than once, he was imprudent enough to incur the responsibilities of matrimony at the early age of twenty-three, with a beautiful girl only fifteen years old....