Sword and Pen Ventures and Adventures of Willard Glazier 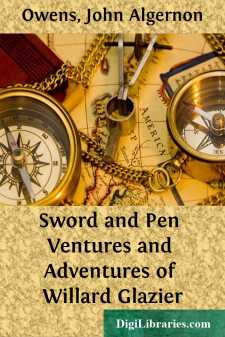 No apology will be required from the author for presenting to the public some episodes in the useful career of a self-made man; and while the spirit of patriotism continues to animate the sturdy sons of America, the story of one of them who has exemplified this national trait in a conspicuous measure, will be deemed not unworthy of record. The lessons it teaches, more especially to the young, are those of uncompromising duty in every relation of life—self-denial, perseverance and "pluck;" while the successive stages of a course which led ultimately to a brilliant success, may be studied with some advantage by those just entering upon the business of life. As a soldier, Willard Glazier was "without fear and without reproach." As an author, it is sufficient to say, he is appreciated by his contemporaries—than which, on a literary man, no higher encomium can be passed. The sale of nearly half a million copies of one of his productions is no slight testimony to its value.

Biography, to be interesting, must be a transcript of an eventful, as well as a remarkable career; and to be instructive, its subject should be exemplary in his aims, and in his mode of attaining them. The hero of this story comes fully up to the standard thus indicated. His career has been a romance. Born of parents of small means but of excellent character and repute; and bred and nurtured in the midst of some of the wildest and grandest scenery in the rugged county of St. Lawrence, close by the "Thousand Isles," where New York best proves her right to be called the Empire State through the stamp of royalty on her hills and streams—under the shadow of such surroundings as these, my subject attained maturity, with no opportunities for culture except those he made for himself. Yet he became possessed of an education eminently useful, essentially practical and calculated to establish just such habits of self-reliance and decision as afterwards proved chiefly instrumental in his success. Glazier had a fixed ambition to rise. He felt that the task would be difficult of accomplishment—that he must be not only the architect, but the builder of his own fortunes; and, as the statue grows beneath the sculptor's hand to perfect contour from the unshapely block of marble, so prosperity came to Captain Glazier only after he had cut and chiseled away at the hard surface of inexorable circumstance, and moulded therefrom the statue of his destiny.

Lineage of Willard Glazier. — A good stock. — Oliver Glazier at the Battle of Bunker Hill. — The home of honest industry. — The Coronet of Pembroke. — The "Homestead Farm." — Mehitable Bolton. — Her New England home. — Her marriage to Ward Glazier. — The wild "North Woods." — The mother of the soldier-author

The infant stranger. — A mother's prayers. — "Be just before you are generous." — Careful training. — Willard Glazier's first battle. — A narrow escape. — Facing the foe. — The "happy days of childhood." — "The boy is father to the man"

Scotch-Irish Presbyterianism of twenty-five years ago. — The "little deacon." — First days at school. — Choosing a wife. — A youthful gallant. — A close scholar but a wild lad. — A mother's influence. — Ward Glazier a Grahamite. — Young Willard's practical jokes. — Anecdote of Crystal Spring. — "That is something like water"

School-days continued. — Boys will be boys. — Cornelius Carter, the teacher. — Young Willard's rebellion against injustice. — Gum-chewing. — Laughable race through the snow. — The tumble into a snow-bank, and what came of it. — The runaway caught. — Explanation and reconciliation. — The new master, James Nichols. — "Spare the rod and spoil the child." — The age of chivalry not gone. — Magnanimity of a school-boy. — Friendship between Willard and Henry Abbott. — Good-bye to the "little deacon"