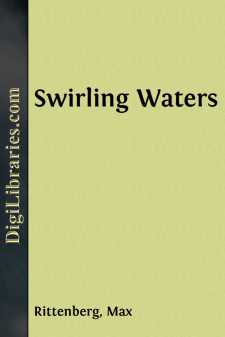 On the crucial night of his career, 14 March, 191-, Clifford Matheson, financier, was speeding in a taxi-cab to the Gare de Lyon.

He was a clean-limbed man of thirty-seven. There was usually a look of masterfulness in the firm lines of his face, the straight, direct glance, the stiff, close-cut moustache. But to-night his eyes were tired, very tired. He leant back in a corner of the cab with drooping shoulders as though utterly world-weary.

At the station his wife and father-in-law were looking impatiently for his arrival. They stood at the door of their wagon-lit in the Côte d'Azur Rapide, searching the crowded platform for him. It was now ten to eight, and the express was timed to pull out of the Gare de Lyon at eight o'clock sharp.

Good form and bad form were the foot-rules by which he measured mankind.

Olive bit her lip. It galled her pride that Clifford should not be early on the platform to see to her comforts. The attentions of her father and maid did not satisfy her; she wanted Clifford to be there to fetch and carry for her.

Pride was the keynote of her character. It was pride and not love that had decided her, five years before, to marry the financier. She had admired the way in which he had slashed out for himself his place in the world of London and Paris finance, from his humble beginning as a clerk in a Montreal broker's office. It ministered to her pride to be the wife of a man who had plucked success from the whirlpool of life. As to the methods by which he had amassed his money, with these she was not concerned. She knew, of course, that there were many who had bitter things to say about his methods.

"Probably it's his brother who's delayed him," said Olive, looking for an explanation which would salve her amour propre. "They both seem to be crazy over their rubbishy scientific experiments."

"I know scarcely anything about him. His name's Rivière—he's a half-brother. He turns up unexpectedly from the wilds of Canada, and lives like a hermit, so Clifford tells me, in some tumbledown villa outside Paris."

"Clifford told me something about it, but I forgot. I wasn't interested in the slightest. No money in it, I could see at once. I told Clifford so."

Sir Francis tugged at his watch impatiently. "He'll miss this train for certain!"

Matheson was striding rapidly through the press of people on the platform. He quickly caught sight of his wife and father-in-law, and came up with a gesture of apology.

"Sorry I'm so late. Very sorry, too, I shan't be able to travel with you to-night."

"Experiment to finish?" queried Olive, with an unconcealed note of contempt in her voice.

"A very important business engagement for this evening. Will you excuse me? I can follow to-morrow."

"There's the 'phone to speak over."

"I have to come face to face with my man. Surely, Olive, you can spare me for a day? Have you everything you want for the journey?"

"Lars Larssen," answered Matheson. He lowered his voice slightly, though on the bustling railway platform there was no likelihood of anyone listening to the conversation.

Sir Francis nodded his head. He was heavily interested in company-promoting himself, as a means of swelling an inadequate property income, and Lars Larssen was a magic name.

Olive cut in with a question. "Have you finished your experiments with your brother?"

"When will they be finished?"

"I can't say. There's a great deal to be discussed and planned."

"Then bring him with you to-morrow. You can plan together whatever it is you have to plan at Monte. Besides, I want to see him."