Swallow: a tale of the great trek 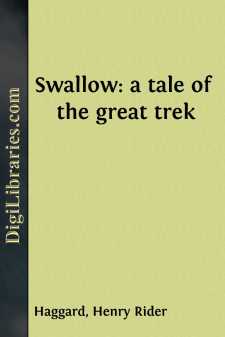 CHAPTER I WHY VROUW BOTMAR TELLS HER TALE

It is a strange thing that I, an old Boer vrouw, should even think of beginning to write a book when there are such numbers already in the world, most of them worthless, and many of the rest a scandal and offence in the face of the Lord. Notably is this so in the case of those called novels, which are stiff as mealie-pap with lies that fill the heads of silly girls with vain imaginings, causing them to neglect their household duties and to look out of the corners of their eyes at young men of whom their elders do not approve. In truth, my mother and those whom I knew in my youth, fifty years ago, when women were good and worthy and never had a thought beyond their husbands and their children, would laugh aloud could any whisper in their dead ears that Suzanne Naudé was about to write a book. Well might they laugh indeed, seeing that to this hour the most that I can do with men and ink is to sign my own name very large; in this matter alone, not being the equal of my husband Jan, who, before he became paralysed, had so much learning that he could read aloud from the Bible, leaving out the names and long words.

No, no, I am not going to write; it is my great-granddaughter, who is named Suzanne after me, who writes. And who that had not seen her at the work could even guess how she does it? I tell you that she has brought up from Durban a machine about the size of a pumpkin which goes tap-tap—like a woodpecker, and prints as it taps. Now, my husband Jan was always very fond of music in his youth, and when first the girl began to tap upon this strange instrument, he, being almost blind and not able to see it, thought that she was playing on a spinet such as stood in my grandfather's house away in the Old Colony. The noise pleases him and sends him to sleep, reminding him of the days when he courted me and I used to strum upon that spinet with one finger. Therefore I am dictating this history that he may have plenty of it, and that Suzanne may be kept out of mischief.

There, that is my joke. Still there is truth in it, for Jan Botmar, my husband, he who was the strongest man among the fathers of the great trek of 1836, when, like the Israelites of old, we escaped from the English, our masters, into the wilderness, crouches in the corner yonder a crippled giant with but one sense left to him, his hearing, and a little power of wandering speech. It is strange to look at him, his white hair hanging upon his shoulders, his eyes glazed, his chin sunk upon his breast, his great hands knotted and helpless, and to remember that at the battle of Vechtkop, when Moselikatse sent his regiments to crush us, I saw those same hands of his seize the only two Zulus who broke a way into our laager and shake and dash them together till they were dead.

Well, well, who am I that I should talk? For has not the dropsy got hold of my legs, and did not that doctor, who, though an Englishman, is no fool, tell me but yesterday that it was creeping up towards my heart?...