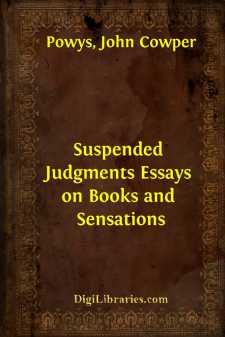 THE ART OF DISCRIMINATION

We all create, or have created for us by the fatality of our temperament, a unique and individual universe. It is only by bringing into light the most secret and subtle elements of this self-contained system of things that we can find out where our lonely orbits touch.

Like all primordial aspects of life the situation is double-edged and contradictory.

The further we emphasise and drag forth, out of their reluctant twilight, the lurking attractions and antipathies of our destiny, the nearer, at once, and the more obscure, we find ourselves growing, to those about us.

And the wisdom of the difficult game we are called upon to play, lies in just this very antinomy,—in just this very contradiction—that to make ourselves better understood we have to emphasise our differences, and to touch the universe of our friend we have to travel away from him, on a curve of free sky.

The cultivation of what in us is lonely and unique creates of necessity a perpetual series of shocks and jars. The unruffled nerves of the lower animals become enviable, and we fall into moods of malicious reaction and vindictive recoil. And yet,—for Nature makes use even of what is named evil to pursue her cherished ends—the very betrayal of our outraged feelings produces no unpleasant effect upon the minds of others. They know us better so, and the sense of power in them is delicately gratified by the spectacle of our weakness; even as ours is by the spectacle of theirs.

Genius itself, in the last analysis, is not so much the possession of unusual vision—some of the most powerful geniuses have a vision quite mediocre and blunt—as the possession of a certain demonic driving-force, which pushes them on to be themselves, in all the fatal narrowness and obstinacy, it may be, of their personal temperament.

The art of discrimination is precisely what such characters are born with; hence the almost savage manner in which they resent the beckonings of alien appeals; appeals which would draw them out of their pre-ordained track.

One can see in the passionate preference displayed by men of real power for the society of simple and even truculent persons over that of those who are urbanely plastic and versatile, how true this is....